Citroen9
Bienvenue! Citroën’s appealing new C3 supermini is now out on UK roads, sales kicking off at the beginning of January, starting at...

Bienvenue! Citroën’s appealing new C3 supermini is now out on UK roads, sales kicking off at the beginning of January, starting at £10,995 OTR.

Straightaway it’s clear that this characterful, new shape C3 builds on the look and success of the C4 Cactus, the nimble compact crossover that’s done much to reboot the Citroën franchise under the watchful eye of British CEO Linda Jackson. 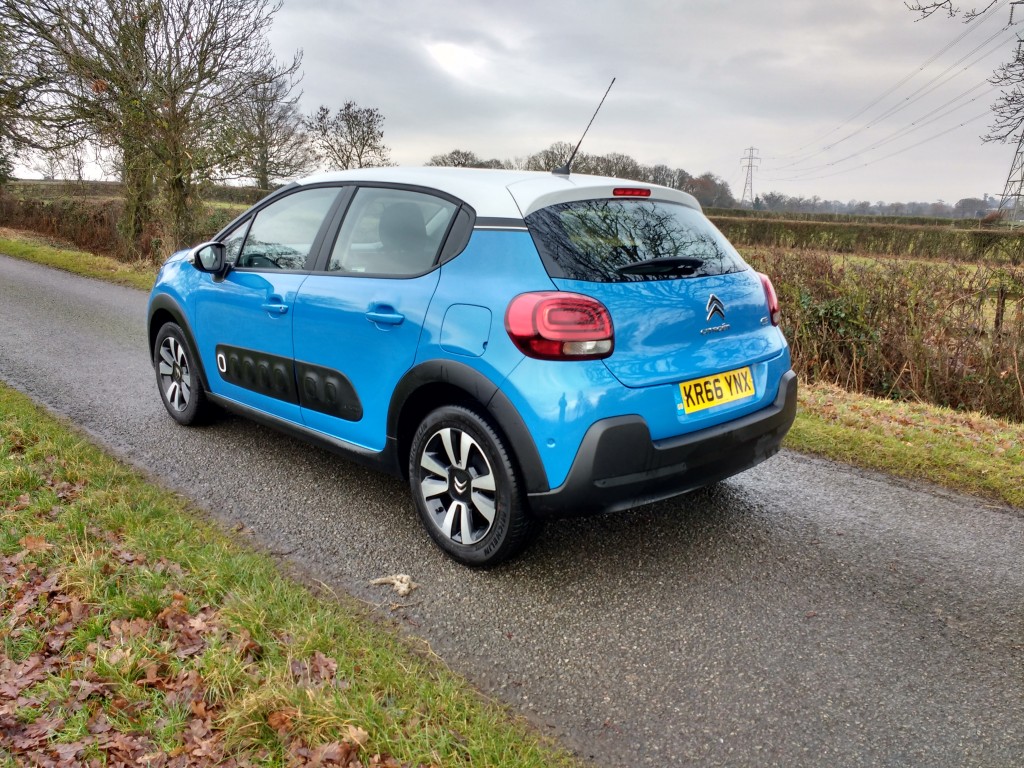 The new C3 style, meshing elements of the fashionable crossover look with some cool design/colour touches, undoubtedly catches the eye in the right way, especially with those (optional) side air bumps on board to add some extra fizz to the mix. 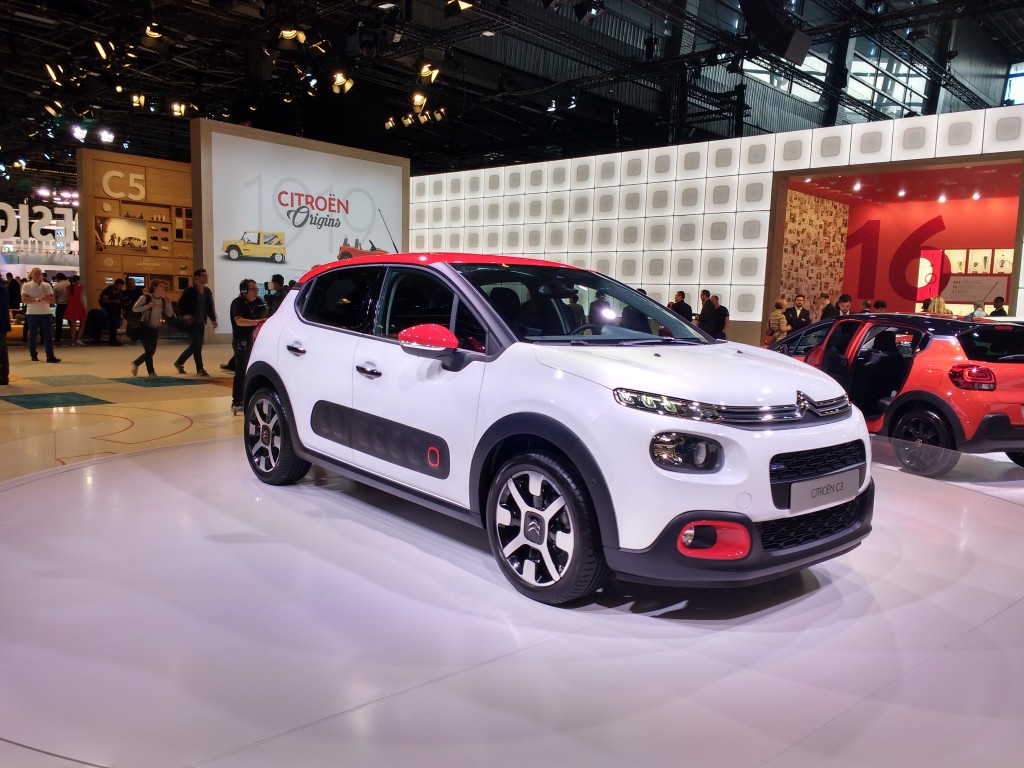 At least, that’s how I see it and I thought just the same when I first saw the new C3 under the lights at last September’s Paris Salon. To me, the C3 was an instant wow.

I should add that despite being a long term, incurable Citroënist (and former 2CV6 owner), the last C3 launched in 201o pretty much passed me by. The first C3 was more imaginative, the C3 Pluriel, especially. But commercially, the C3 has been a serious player, Citroën shifting 3.6 million globally (and 200,000 in the UK), making it the corporate best seller. 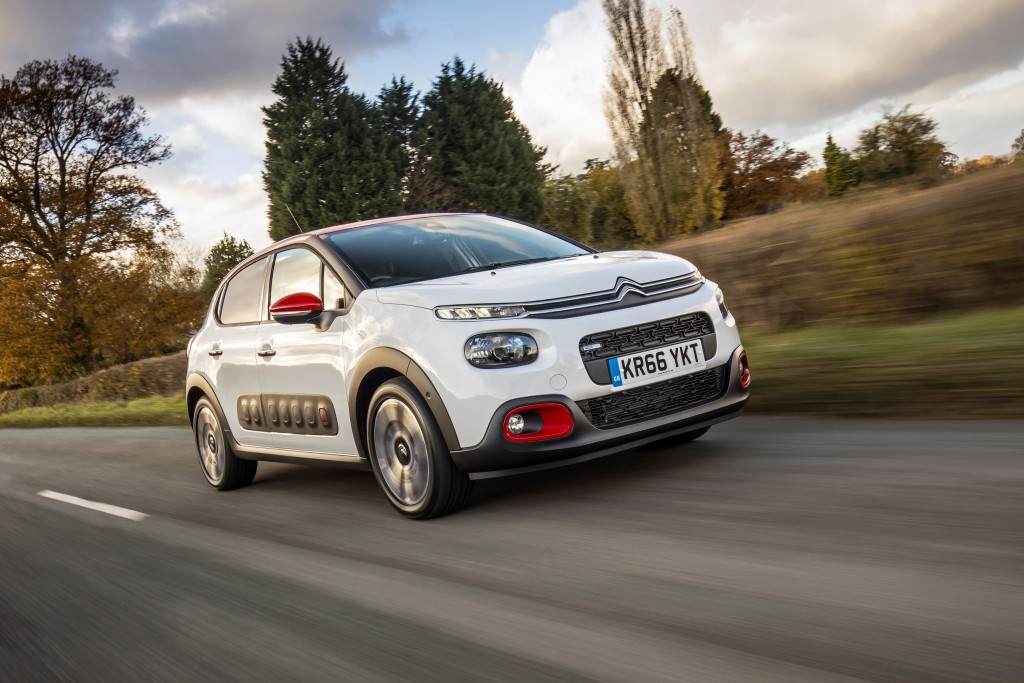 What’s different this time is the C3’s design and attitude. We start with a neat, compact, five-door shape, then factor in all the right kind of personalization cues, Mini, Fiat 500 style. 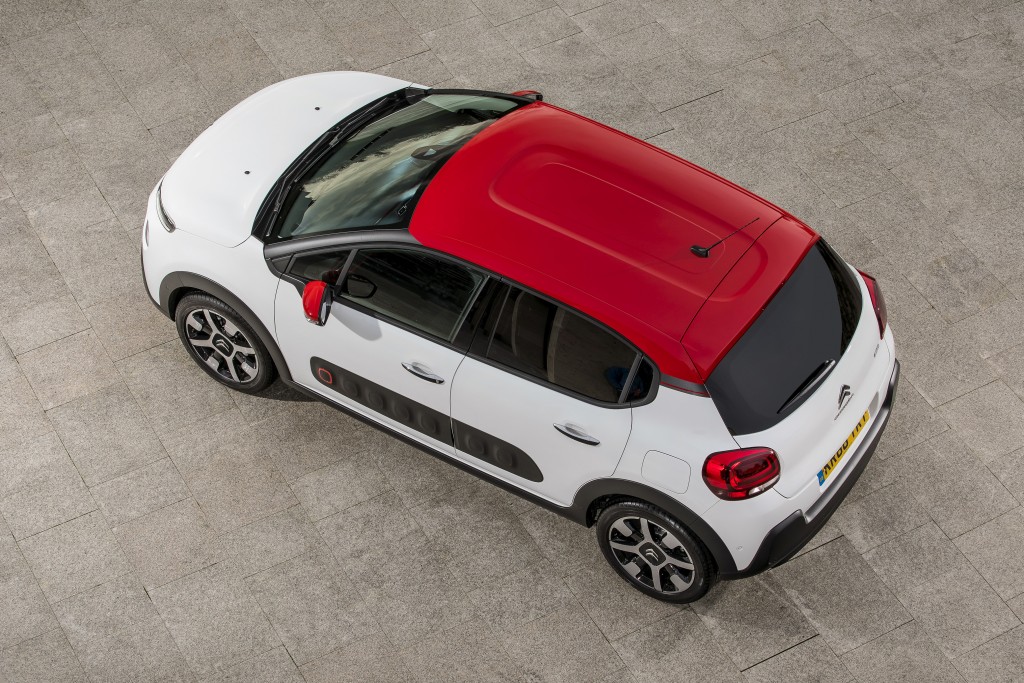 However there’s also a side of the C3 that speaks to the classic Citroën fan in that the car turns out to be quite softly sprung. Thus there are hints of alluring small Citroëns of the past in the rather relaxed way the C3 rides and steers its way through corners. 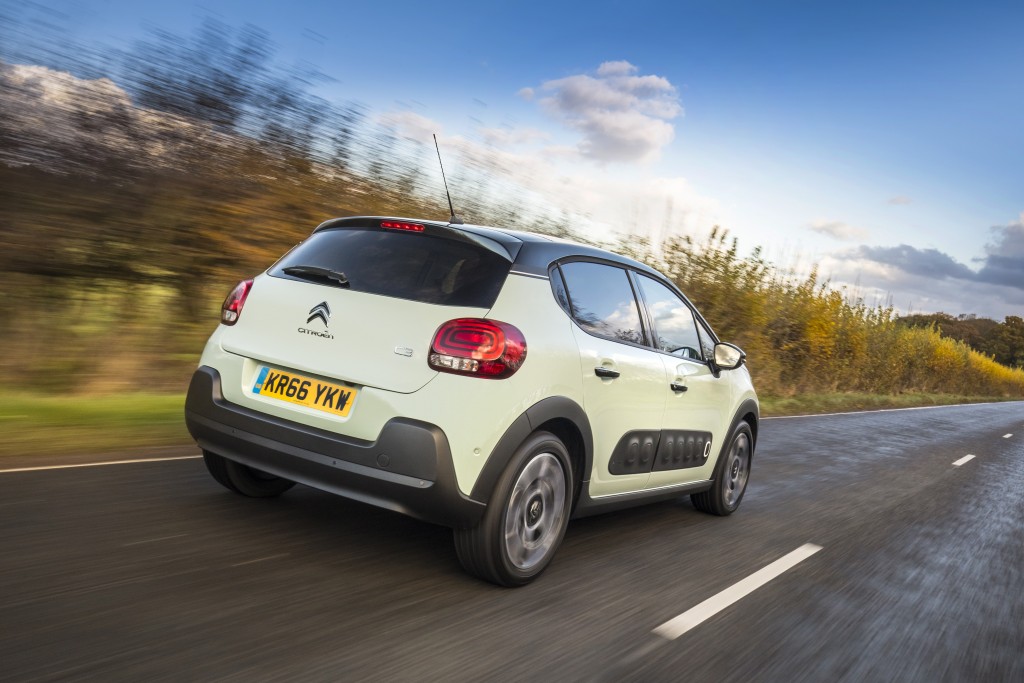 To me, this gives it a character and charm that sets it apart from the norm. Comfort levels at the same time are outstanding. Yes, good, although I concede the softish suspension and degrees of body roll (when pushed) may not be for everyone. 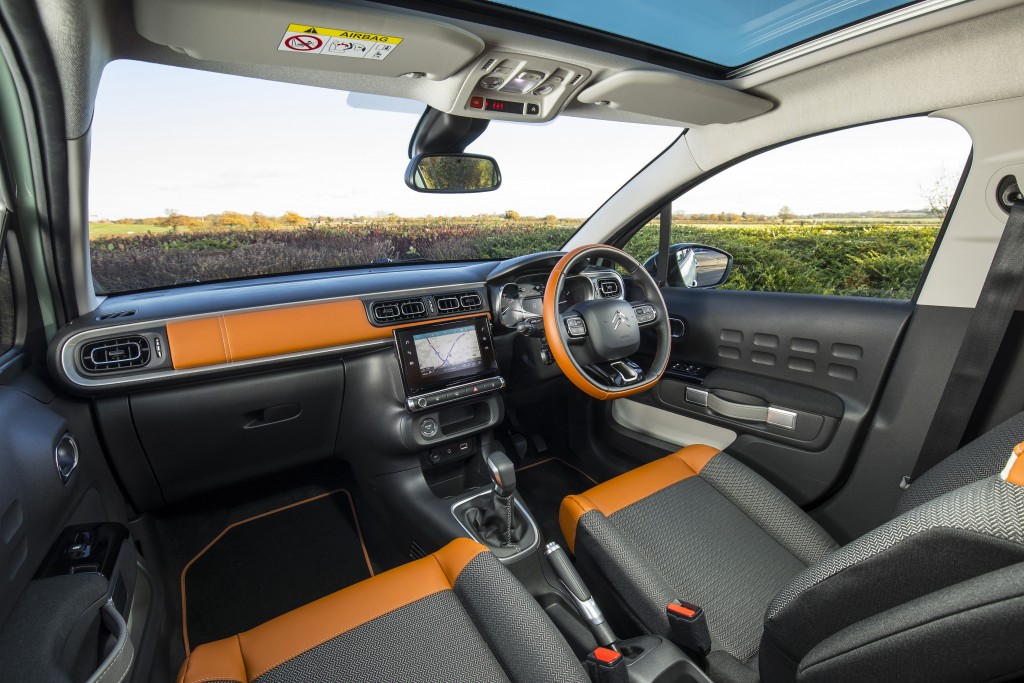 Inside, the C3 has been dismissed as plasticky but I’m not so sure. In fact, I’d say the cabin’s actually of higher quality than some higher priced cars out there. Presentation is strong, ergonomics are fine and the wide sofa like front seats are a peach. Life in the back is a little contained but still bearable. You also get a decent 300-litre boot.

Some of the new C3 detailing such as the canvas-style door grab handles are fun and really well done. You need to read the small print however to check whether they’re options. A novel ConectedCam device behind the interior mirror lets you snap pics and video on the move, ready then to post online. Clearly, a clever tweak with today’s social media in mind. 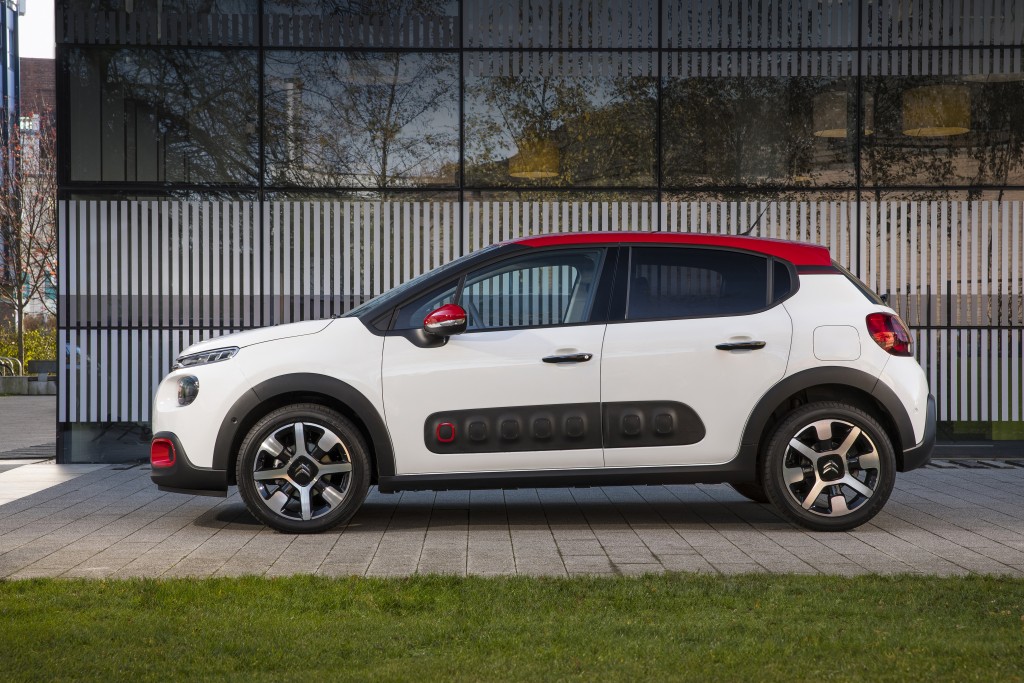 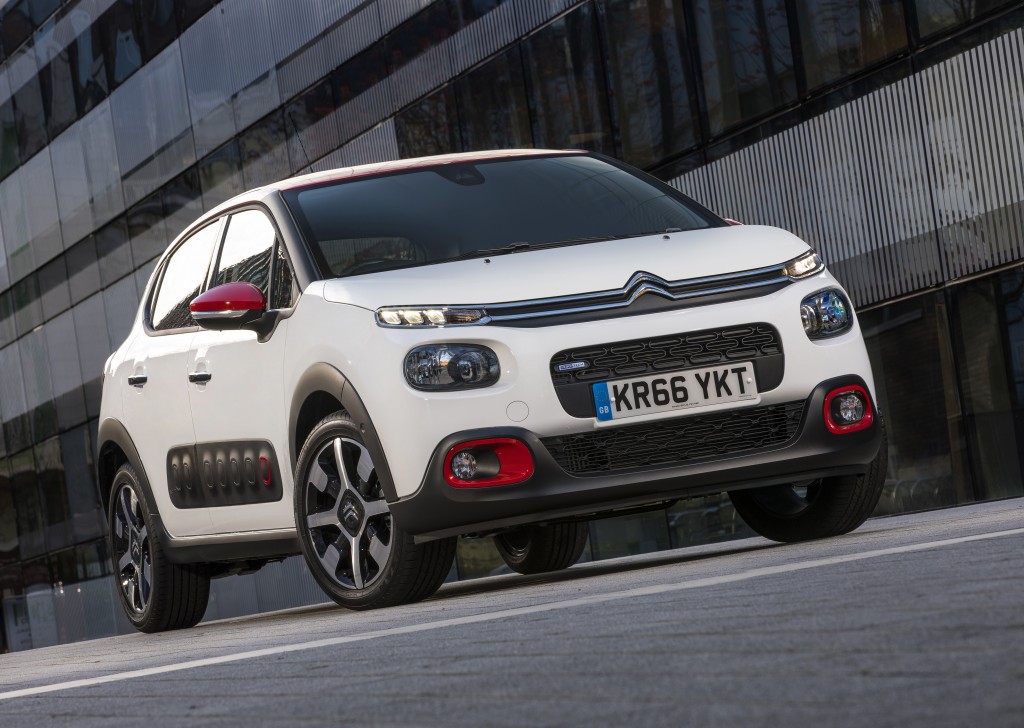 At launch, there are five engine options: three 1.2-litre petrols, two 1.6-litre diesels. Of the five cars I’ve driven to date, the pick would have to be the C3 Flair 110 petrol manual which lists at £15,995 but as tested was loaded up with kit to arrive at a bracing £18,085 on the road. 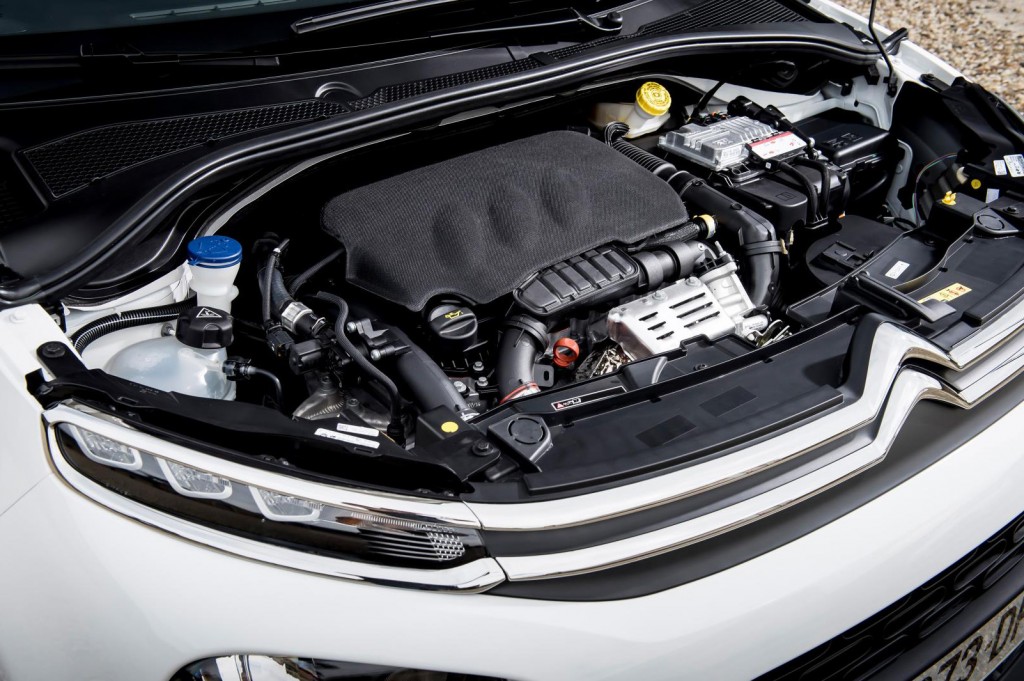 On the move, the three cylinder turbo engine is both punchy and thrummy and actually has better eco numbers (103 g/km, 61.4 mpg combined) than the cheaper 68 and 82 ps petrols on offer.

The two diesels (75 and 100) both come in below 100 g/km and have the best combined economy. I liked the four cylinder smoothness and refinement in the C3 Flair BlueHDi 100 that I tried but you have to wonder now how long diesels will last in cars of this class. On my wish list, I’d like a tighter manual box (still only five speeds?) and sharper clutch action. Despite that, the C3’s fun to drive and while it’s unlikely to out-corner a Fiesta, I find it rewards in other kinds of ways. 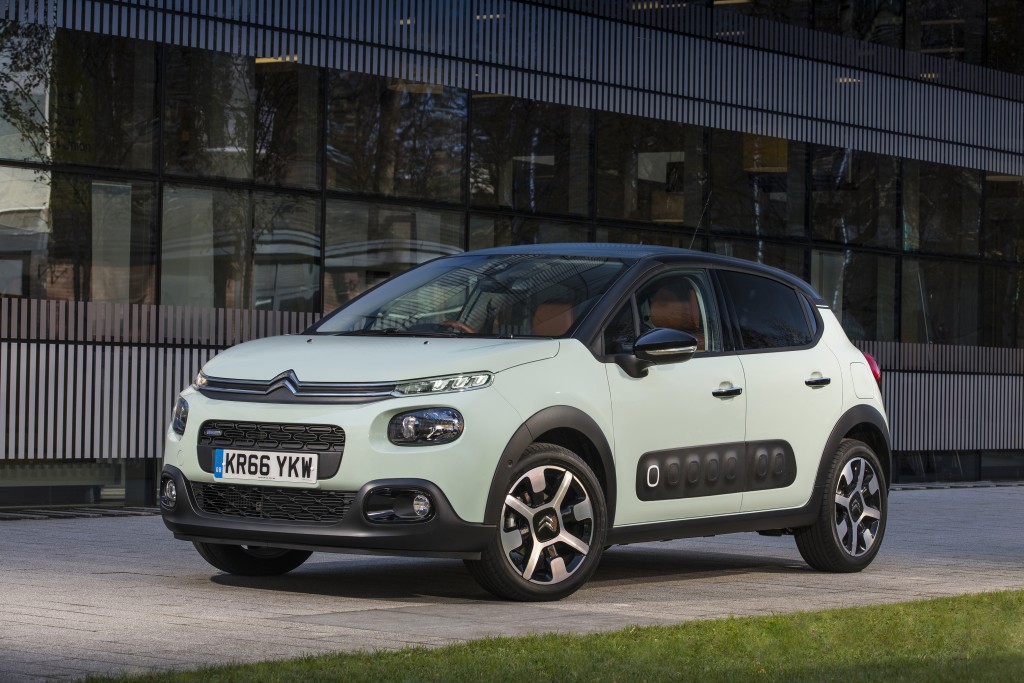 Citroën no question has raised the bar with the new C3, a model that taps competitively into today’s hi fashion supermini sector but at the same time brings reminders of past greats from Citroën’s back catalogue. There’s a hint of quirkiness to the new C3 which all told has to be the most competitive small Citroën in aeons. C3s to date have largely been bought on price but this time it’s different. As an alternative to the usual supermini suspects, the personable new C3 strikes a different chord.