Good news. I’ve finally caught up with the Alfa Romeo Giulia Veloce, the model that’s quietly building quite a name for...

Good news. I’ve finally caught up with the Alfa Romeo Giulia Veloce, the model that’s quietly building quite a name for itself within the Alfa fan community. 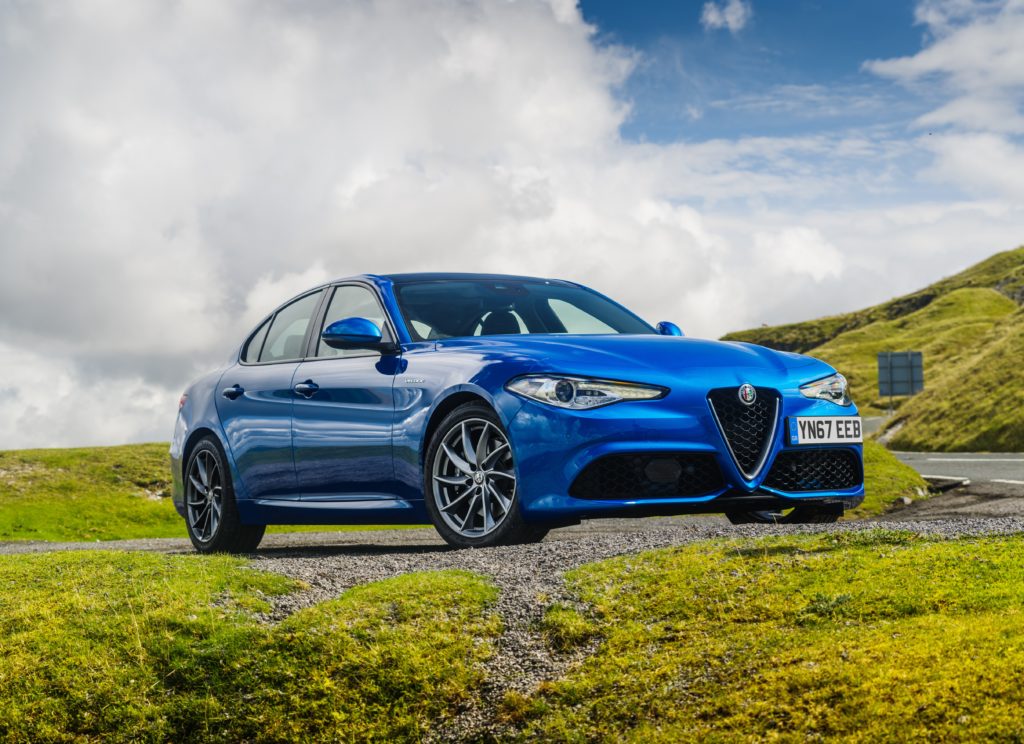 Faster than the standard petrol/diesel Giulias (150/200 ps) yet not as extreme as the masterful 510 ps Giulia Quadrifoglio, the Veloce launched last year with a mission to slot in between the two. 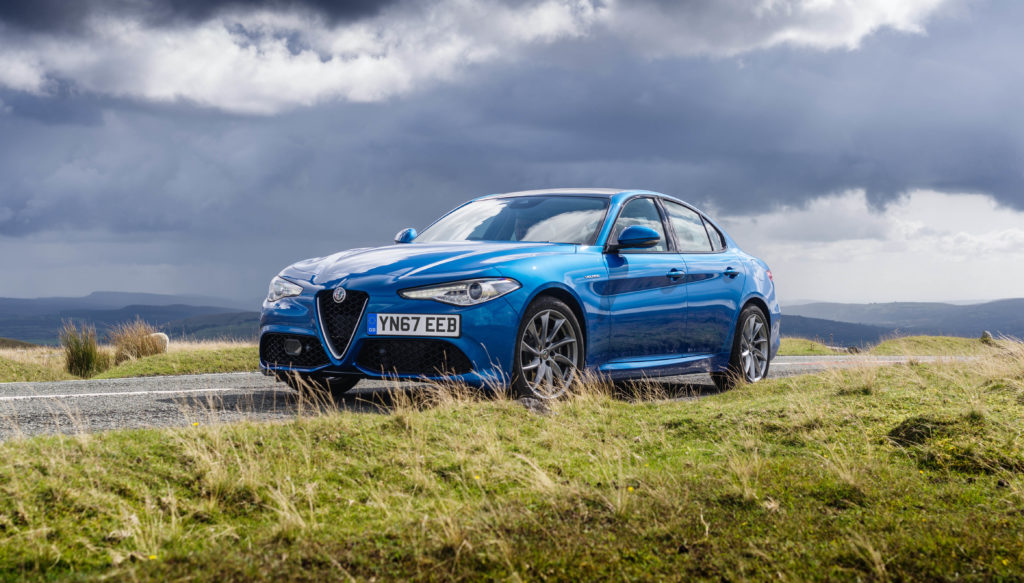 And that it does although at first sight, with 280 ps to its name, the Veloce might seem little more than a warmed over Giulia petrol normale. Visually a bit sharper and offering more pep but nothing too dramatic behind the wheel, perhaps.

You’d be surprised, though. The Alfa Romeo Giulia Veloce (what a fantastic name…) turns out to be a discreet, tautly sprung Italian sports saloon that goes harder than you’d think and at times really doesn’t seem that far off the Quadrifoglio in terms of day-to-day pace. So up there with the BMWs of this world? Absolutely. 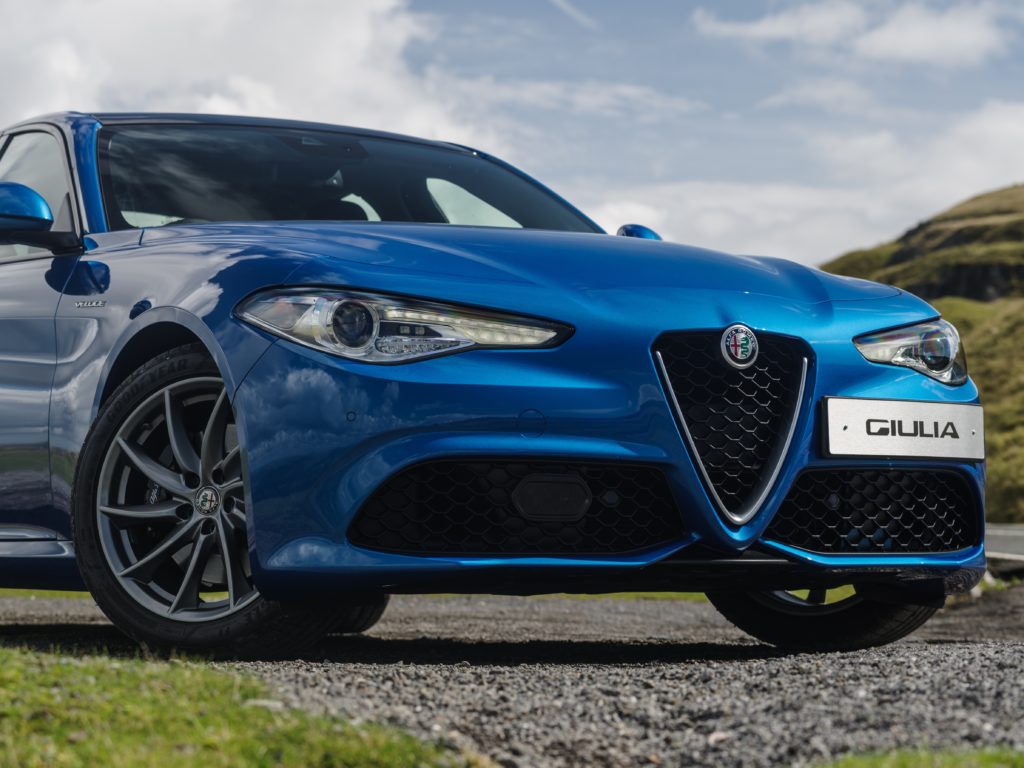 Not that the Veloce aggressively shouts its abilities from the roof tops, you understand. You need to look out for those subtle Veloce badges on the wings, the more overt sports front/rear bumpers and set of black brake calipers. 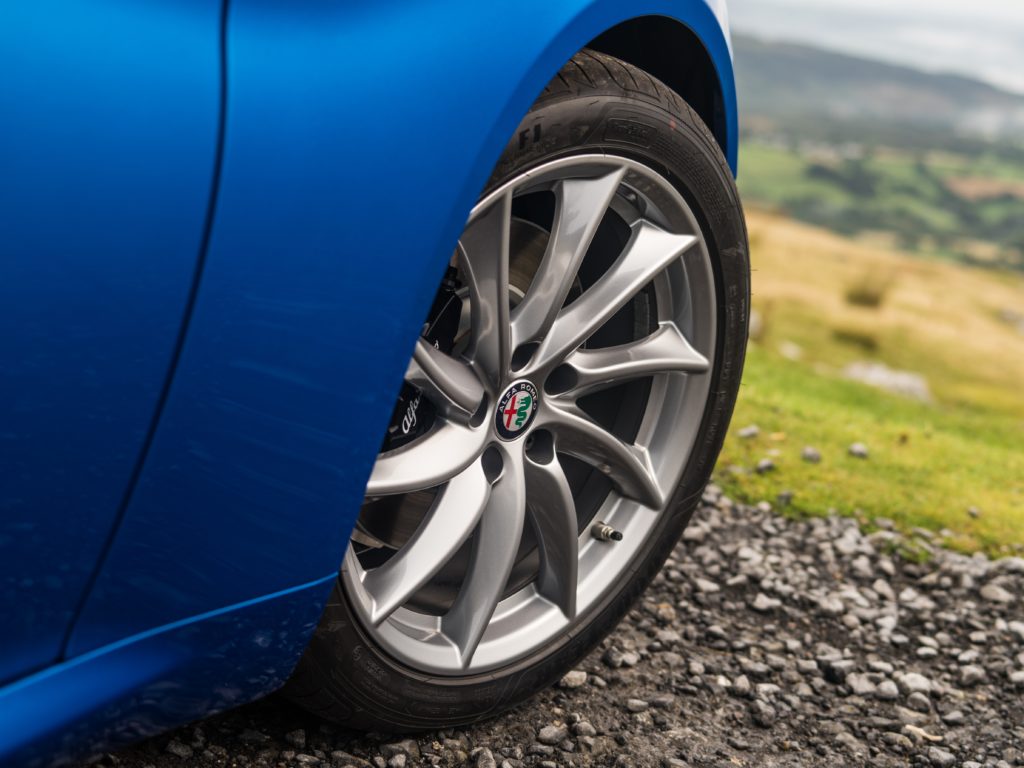 You also need to know your Giulias to clock those 18-inch Turbine 10-spoke alloys and that sexy rear bumper diffuser. While it’s visually similar to the Speciale version of the standard Giulia, the Veloce, in a word, is subtle. 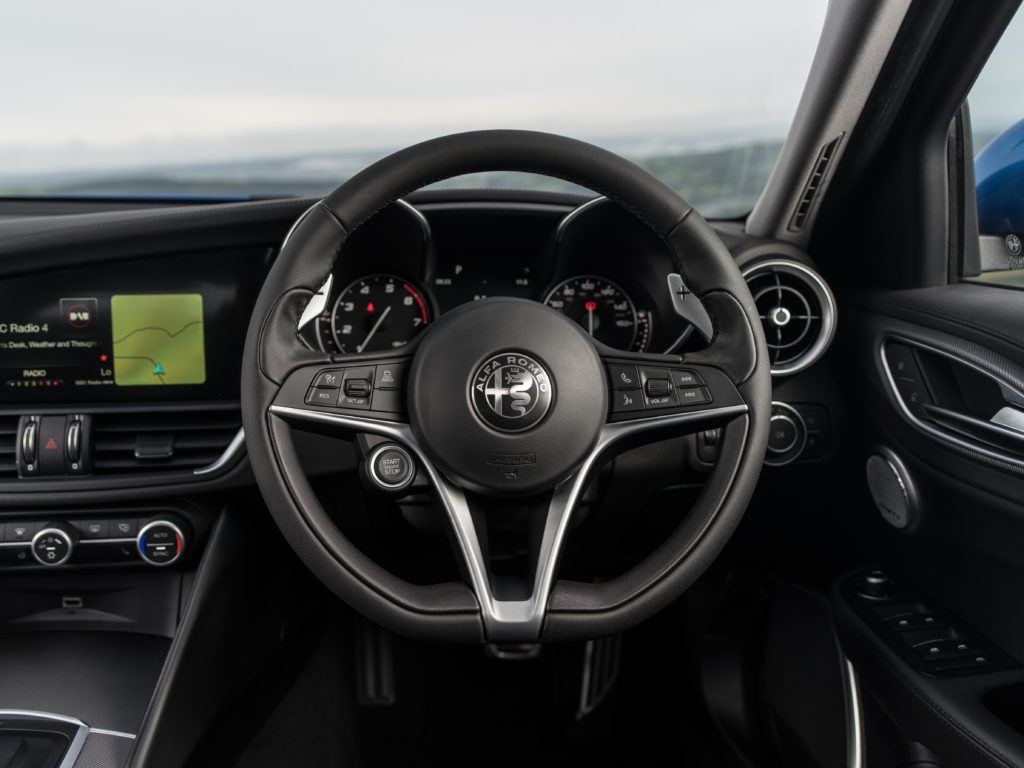 Inside, the cabin has a premium look and feel and is dominated by a set of firm, leather sports seats whose ribbed trim evokes Giulia Veloces of an earlier age, like my own ’72 GTV coupe, as do those lovely cowled main instruments. Yummy.

Up ahead, the Veloce gets a upgraded twin cam version of the 1995 cc four cylinder turbo powering the latest petrol-engine Giulia. 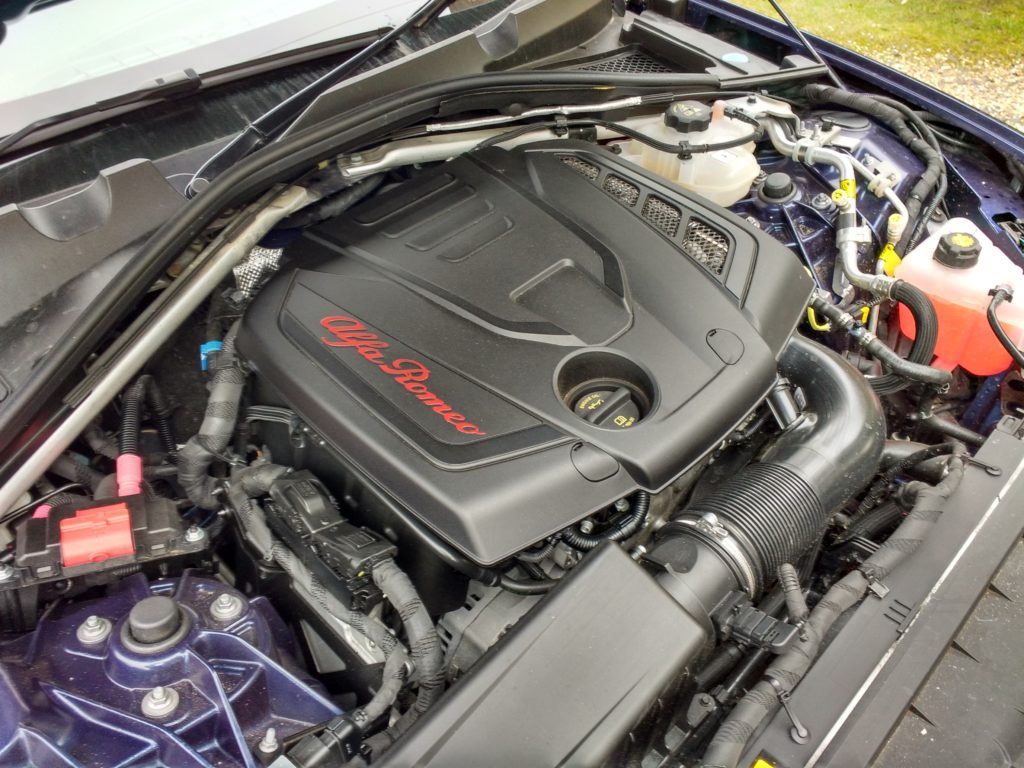 Shared with the Stelvio SUV, it produces 280 ps at 5250 rpm, just shy of Alfa’s relatively low set 5500 rpm red line. This, you find, is an engine big on commitment and outright punch.

Generating 400 Nm of torque at just 2250 pm, the Veloce is especially strong in the low to mid-ranges. Maybe not so classical Alfa in sound or delivery but boy does it motor. How fast? Alfa quotes 0-62 mph in just 5.7 secs and subjectively that feels entirely believable. Pace, the Veloce does not lack.

Controversial perhaps but eight-speed ZF auto transmission is standard issue on all UK Giulias, sending power to the rear wheels as Alfa goes back to the future and rediscovers the art of sporting RWD. 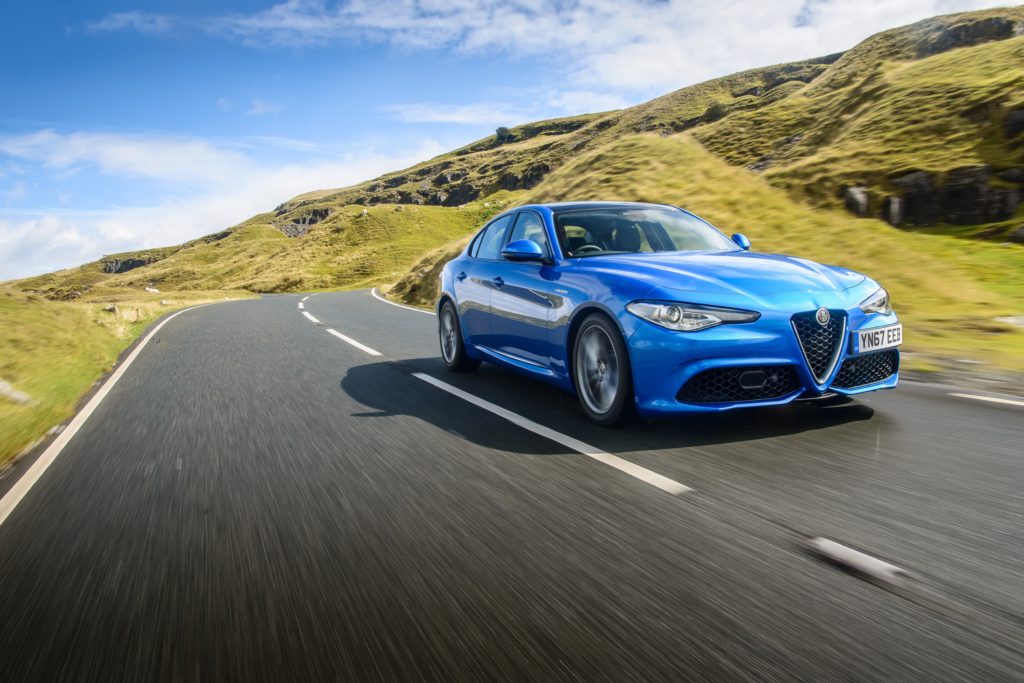 You find the Veloce steers beautifully, with the kind of light, agile front end response that a 159 driver can only dream about.

The shift to RWD on the Giulia’s new gen platform leaves the steering uncorrupted by power loads and turn in is impressively swift and precise. The Veloce steering is sharp, well-weighted and accurate, although a wide turning circle when parking will be cheerfully familiar to many past and present 156 drivers… 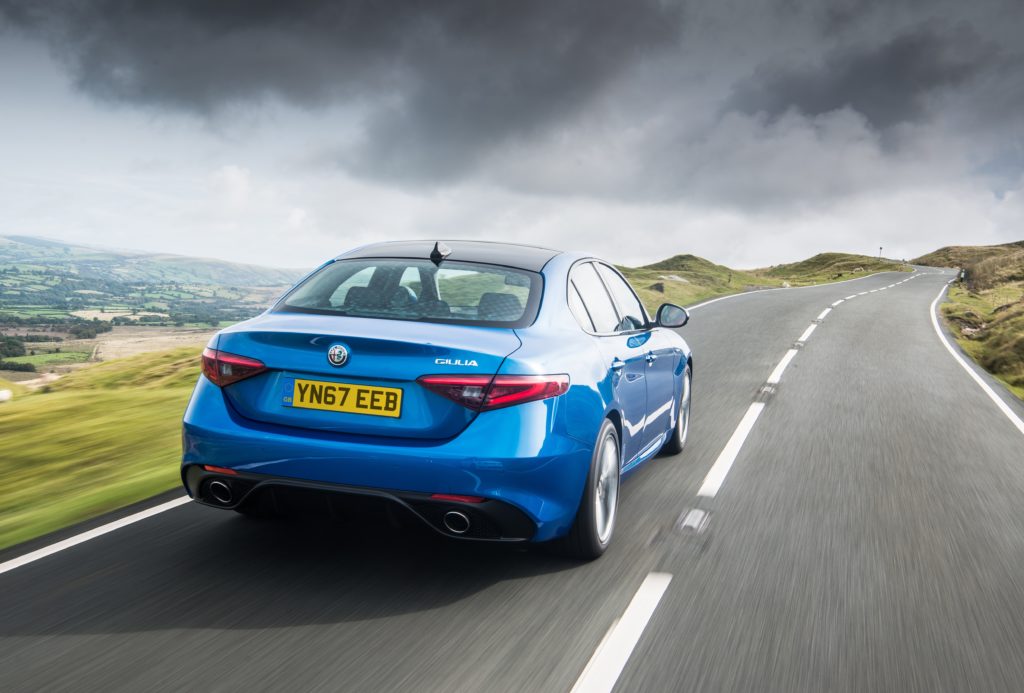 Find a good road and the Veloce is taut, focused, well balanced through the twisties. Roadholding, yes, it has that in spades. The Veloce turns out to be the classic grip and go sports four-door. Tenacious in the dry, it hangs on effectively in the wet, too. 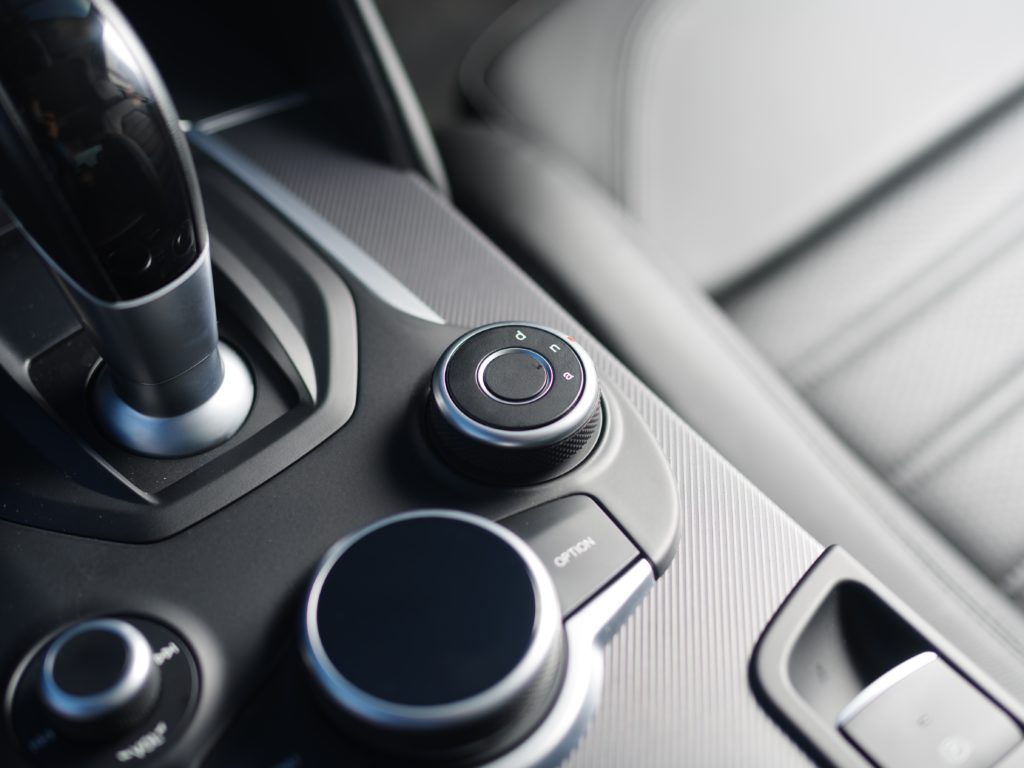 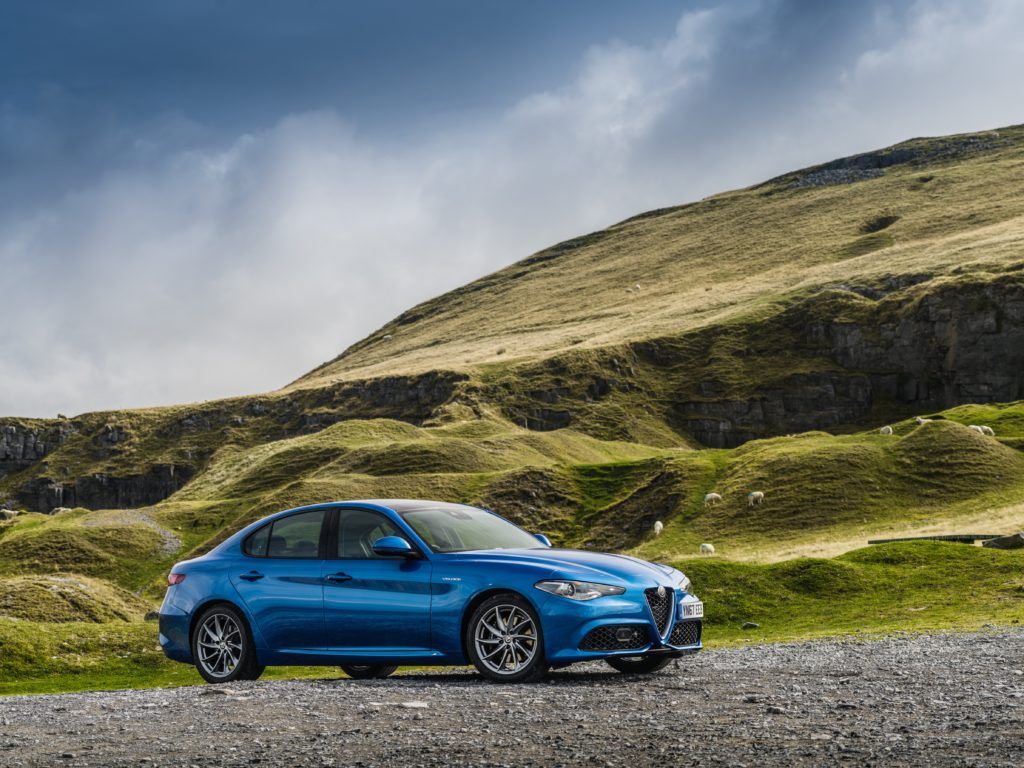 The Veloce set up could be an acquired taste, though, as it leads to a pretty hard, knobbly ride on those 18-inch Pirelli run flats. While that sends out a suitably sporting message, day to day, some might well pine for the more compliant settings of the Giulia normale. 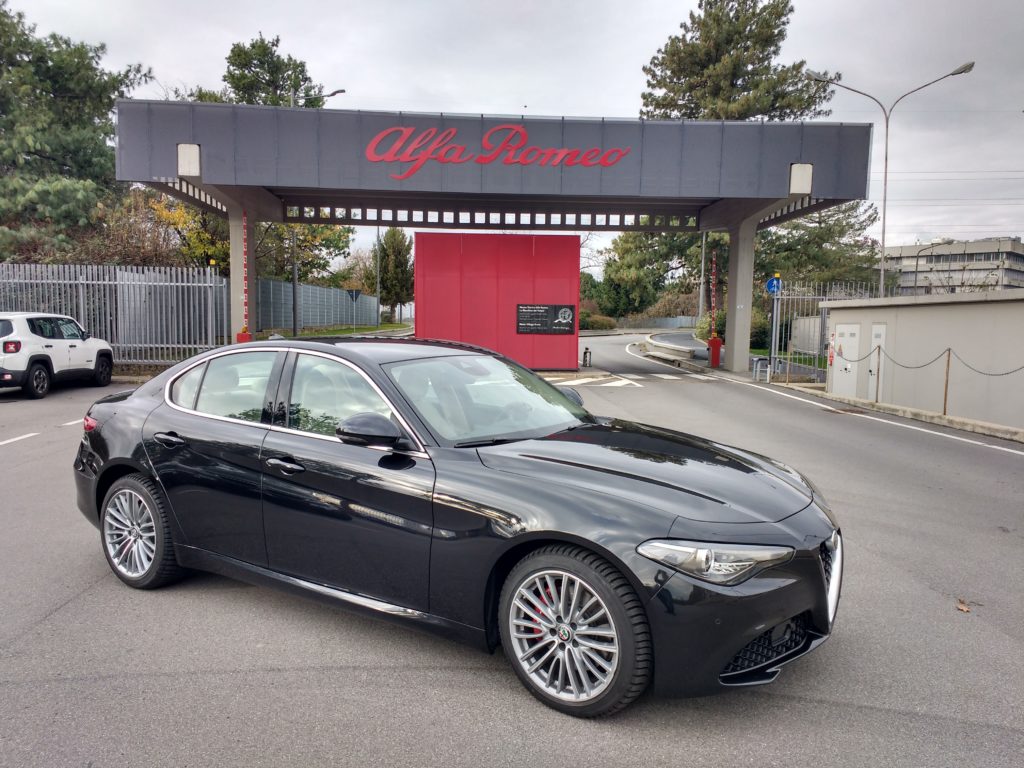 Such as I discovered when Alfa lent me this 180 ps 2.2-litre Giulia diesel for a weekend in Milano last year. Ride comfort on that car was excellent, as was the car’s all up sophistication.

Back to the Veloce and the brakes, while powerful, could be more progressive. You need to warm them up. That’s another surprise for this relatively meek-looking four-door. 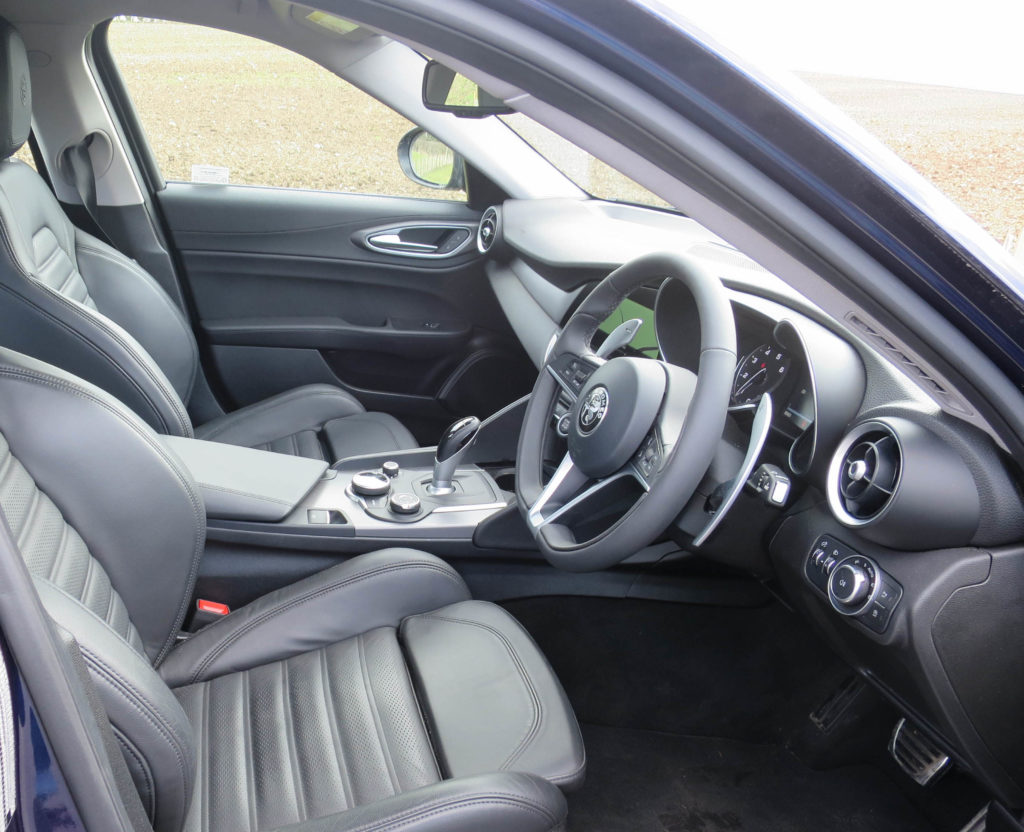 Over the course of a week, I can’t say I really got on with the Veloce’s sports seats. They truly looked the biz but seemed too hard, sitting you and the front passenger up too high. 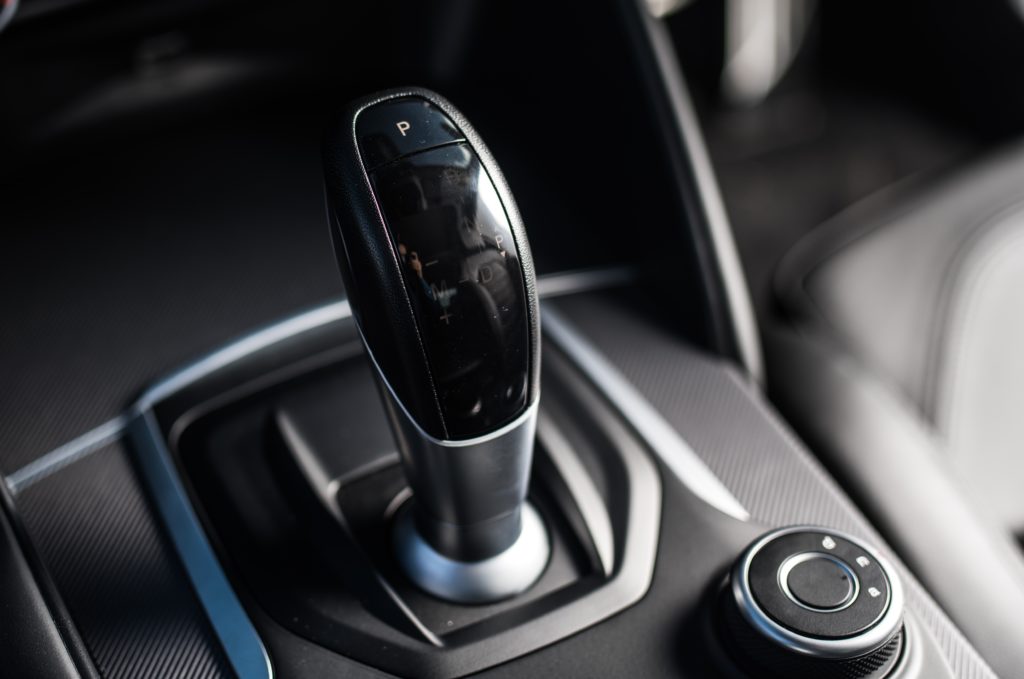 Also, the quality and feel of that eight-speed auto shift lever is nowhere near premium enough. Memo to Alfa: In a showroom decider, something this fundamental (ie the gearlever action) could be make-or-break for a BMW/Audi crossover buyer. The Veloce’s aluminium steering wheel paddle shifters meantime were great. 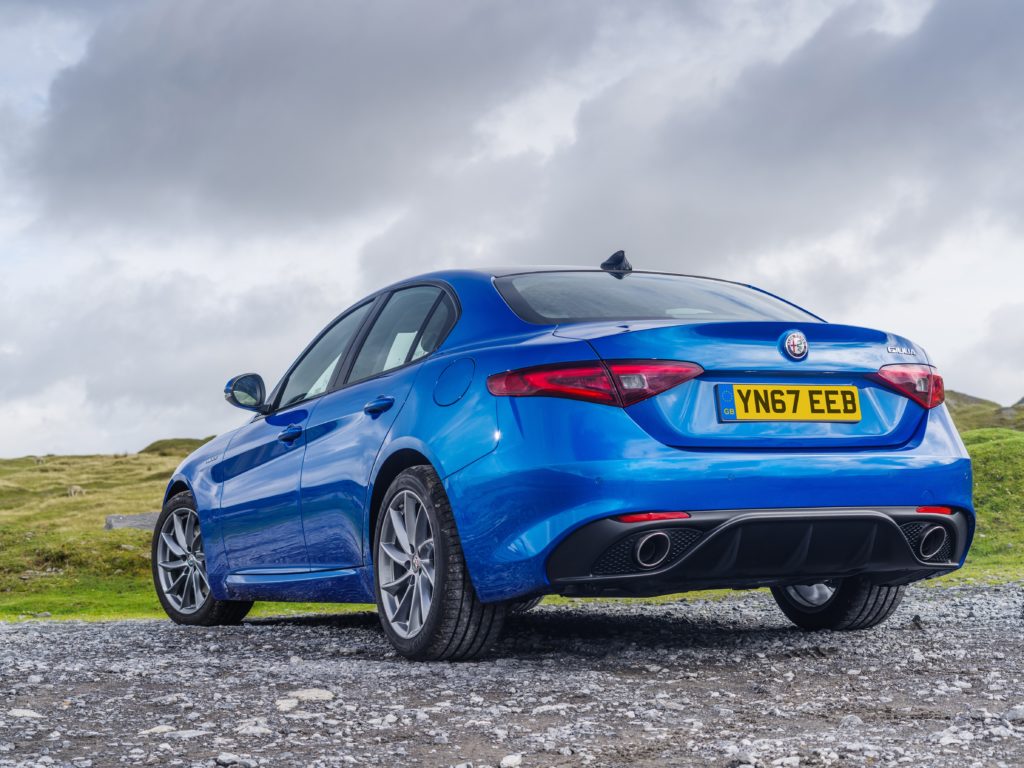 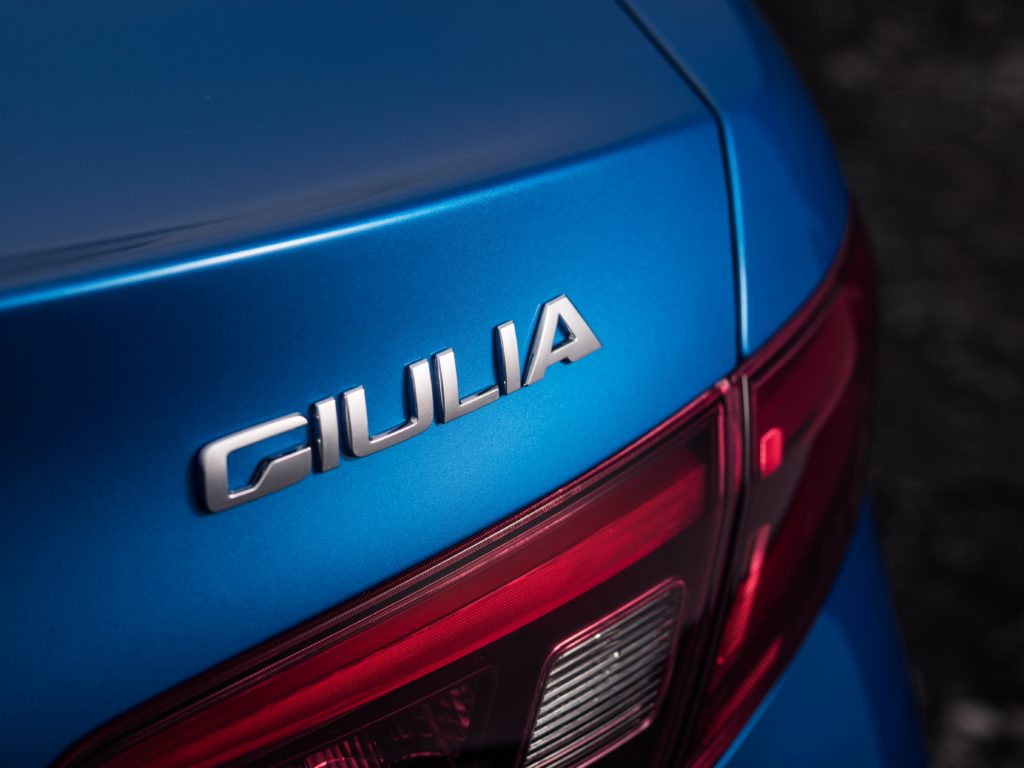 Bottom line, the Giulia Veloce gets much closer to the speed and dynamics of the headline 510 ps Quadrifogilo (£61K) than you might imagine. It is classy inside, well specced and suitably involving to drive. It also has a character that’s so different to the Teutons and not a car you’ll likely see coming the other way everyday. I like things like that. 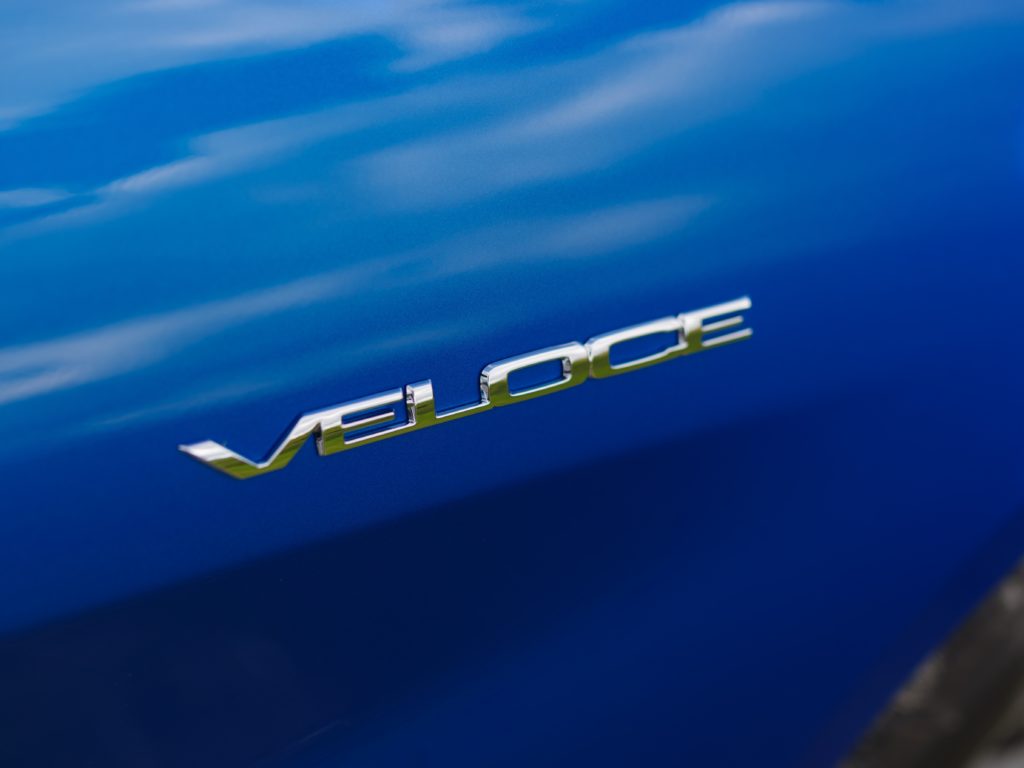 So yes, the Veloce badge really means something special, after all.