It’s late January in Tokyo and that means it’s time for one of the city’s more alternative gatherings. The Tokyo New Year meeting is a spectacular open air festival for classic cars that no petrolhead can fail to enjoy. Organised, as ever, by the Japan Classic Car Association, the NYM is traditionally held on the last Sunday on January. Thus the 2016 edition is tomorrow, January 31.

Here’s what to expect: 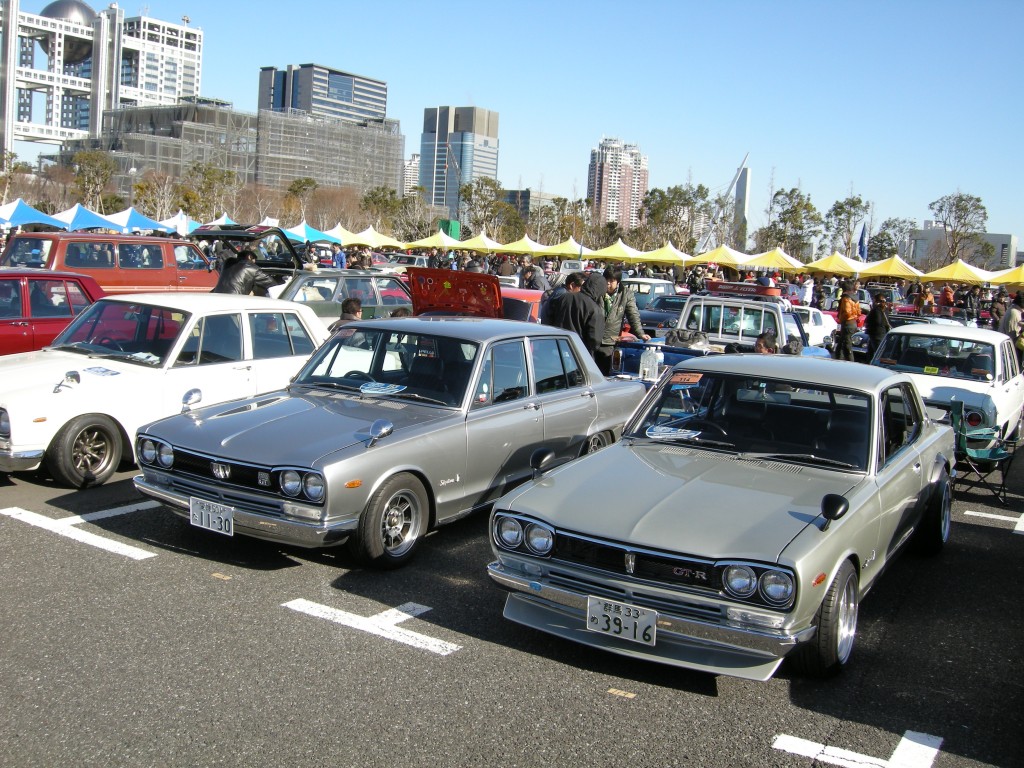 On the face of it, the Tokyo NYM is a gathering of some 300-400 classics, many Japanese but with also a fair smattering of European and US gems present. Intrigued? You will be…. 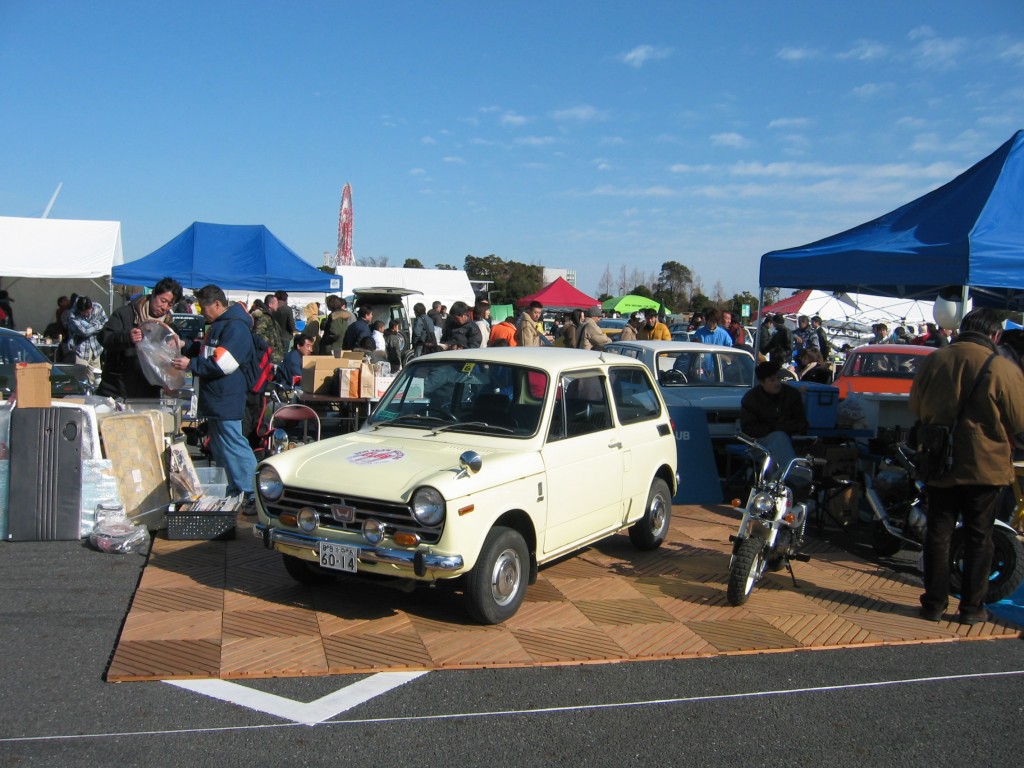 What sets it apart is that it’s always held outdoors (yes, even in the deep midwinter) but then that’s not so bad because Tokyo winters are much crisper, sunnier and drier than ours.
Happily, while some things are the same each year, there’s still a willfully anarchic feel to it all. As such, you never know for sure what will really show up on the day. I like things like that. 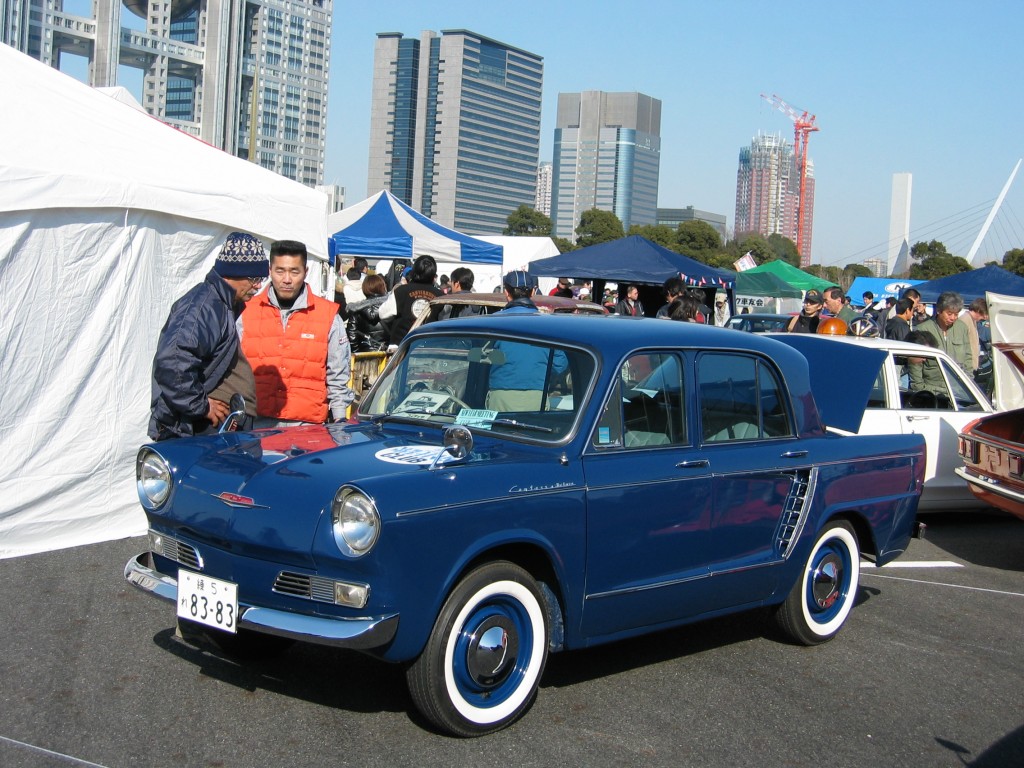 Also, at a time when many UK and European shows are becoming ever bigger, glitzier, the Tokyo NYM is a much simpler, homespun affair, just as it’s always been. 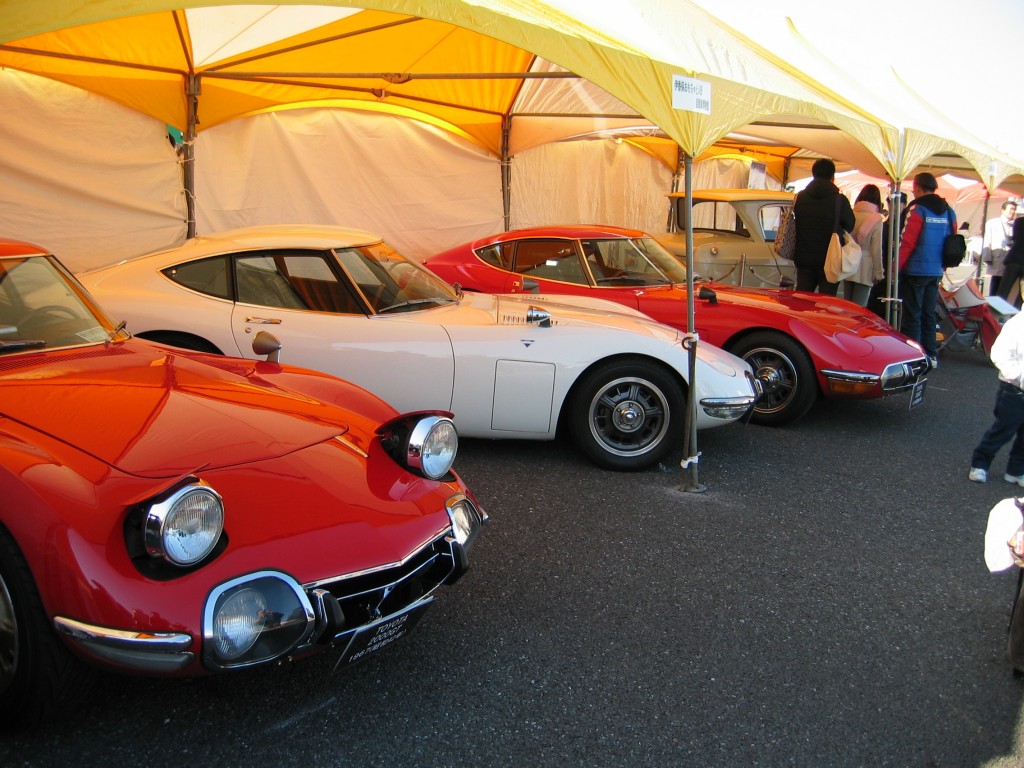 The kind of place where a row of immaculate, hugely valuable Toyota 2000 GTs will be sited next to an equally immaculate row of Lotus Europas and Nissan Skylines while there in the background, amid a huge, sprawling autojumble, a big man wearing a cowboy hat will be selling toy cars, books and model trains off a tarpaulin on the ground. 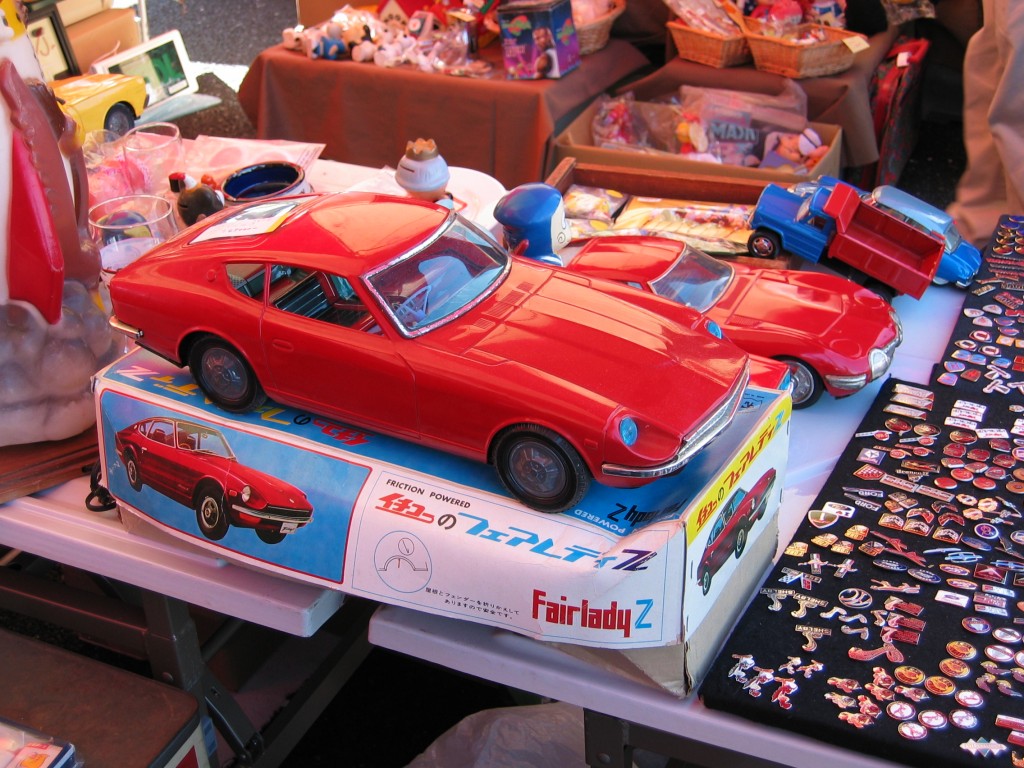 Yes, welcome to the NYM which is for pre ’79 cars and has been running in various forms in Japan’s buzzing capital since 1977.
The NYM takes place these days in Daiba, on reclaimed land on Tokyo’s approximate equivalent of London’s Docklands. In the shadow of the overhead expressway and the mind bendingly ugly Fuji TV building, this part of Daiba’s rather short on what you might call glamour. 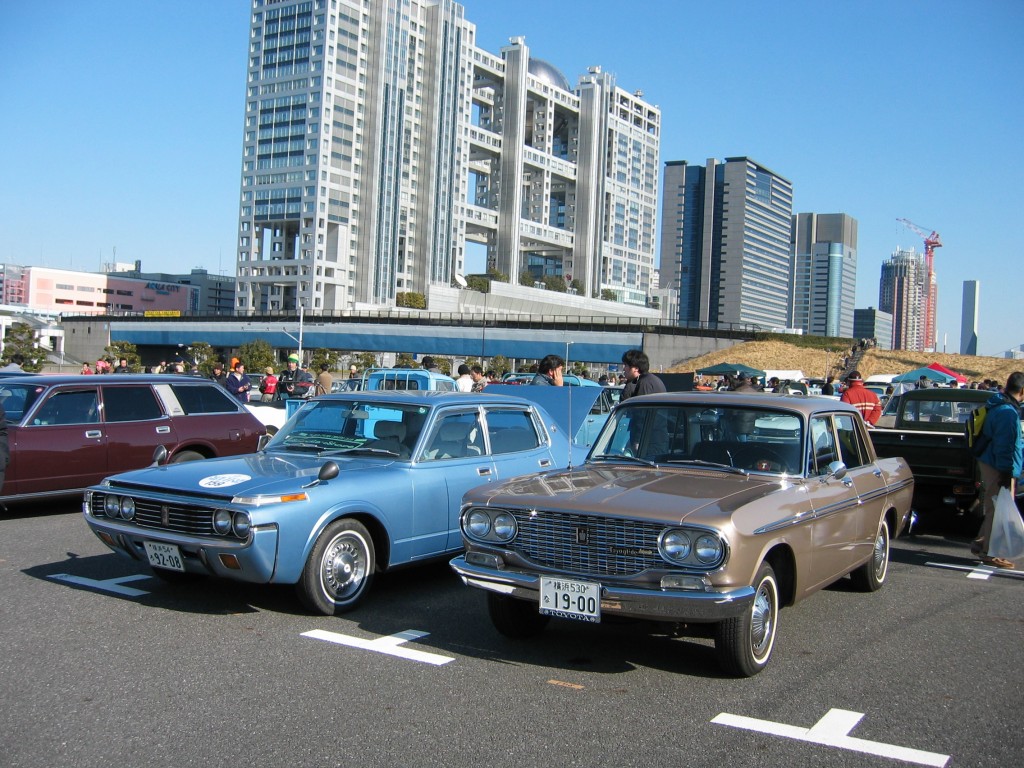 With simple stands and stuff often strewn haphazardly on the ground, or sometimes over cars, it’s also a long way from order and discipline of Goodwood, say. Scruffy, yes. Crazy? Could be. But then in a way that’s what makes it so compelling. 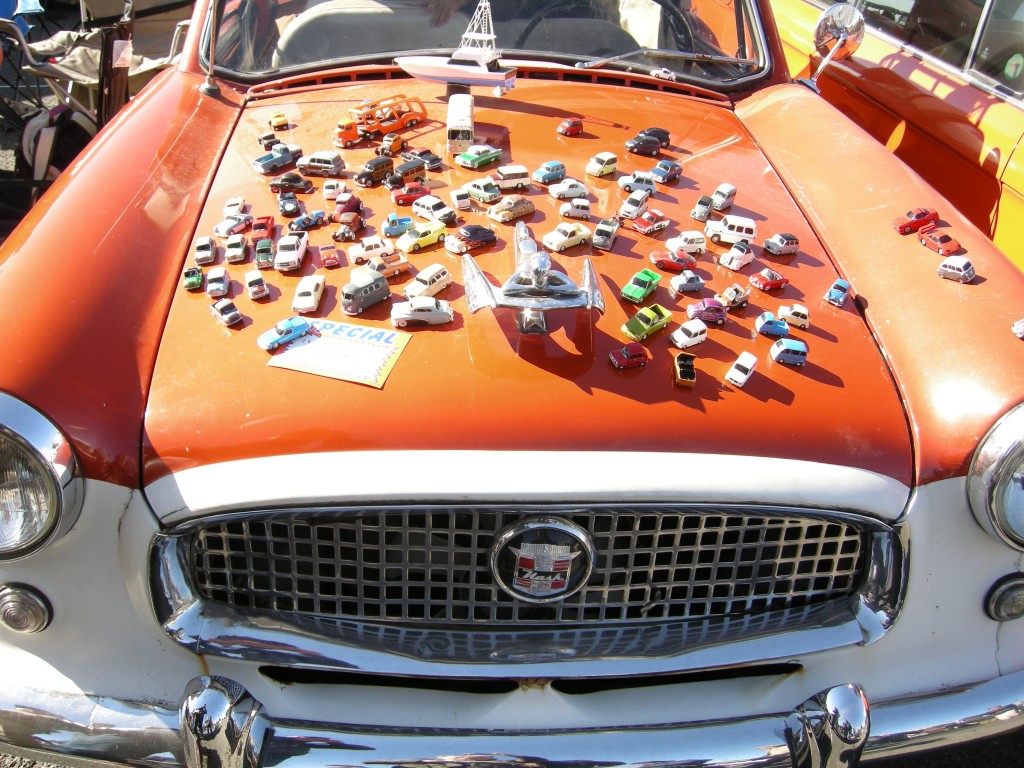 Why? Because it’s just so different, because of the cars that come out, some of which you’ve maybe only ever seen in books. True to form, the NYM car park is a genuine magnet in itself. 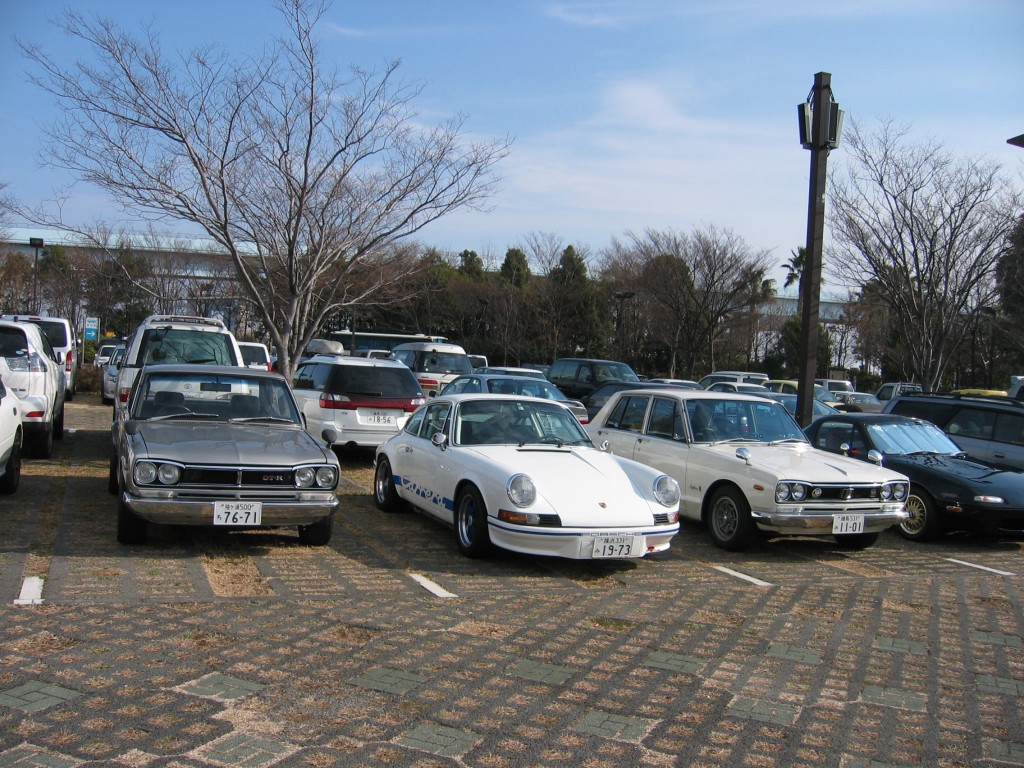 Toyota Crowns, Daihatsu Midget 3-wheel trucks (yes, there’s a club even for them), Hino Contessas, Mitsubishi GTOs, Mazda Carols, early Datsun Bluebirds, Subaru Leones, Honda N360s and Isuzu Bellets: just some of the Japanese built classics that you would rarely, if ever, encounter in the UK are all there in Daiba, in one guise or another. 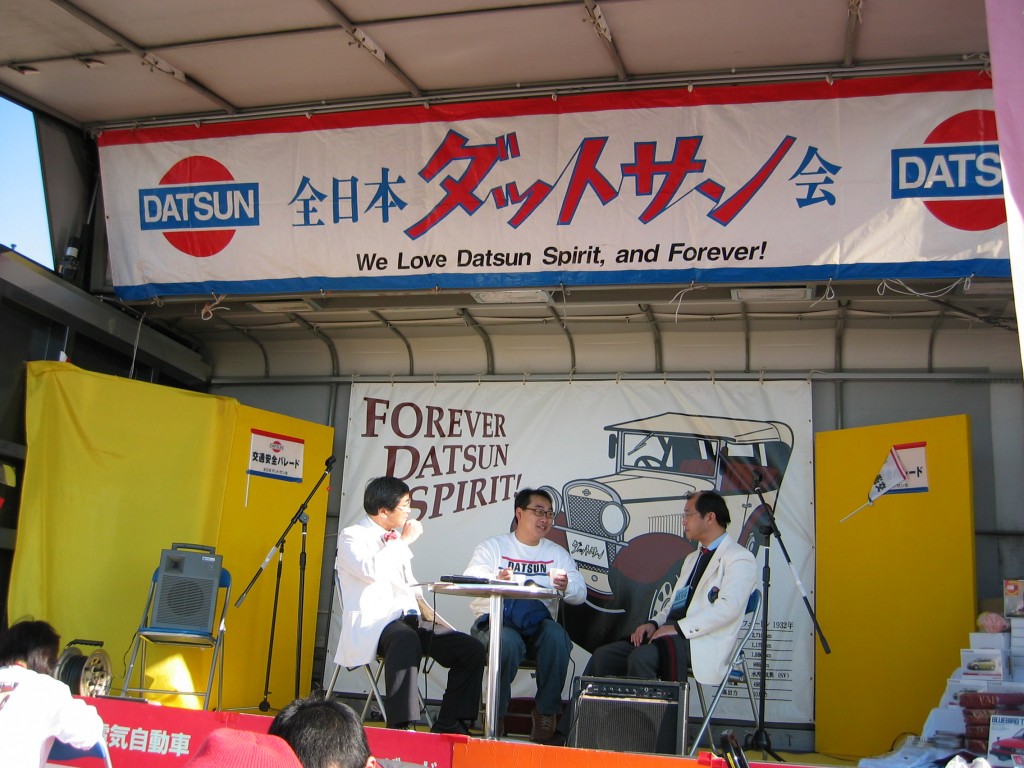 Every year, the Datsun club brings a big truck as part of their display and talk show, bearing the legend “We love Datsun spirit, and Forever!” You just can’t argue with fandom like that. 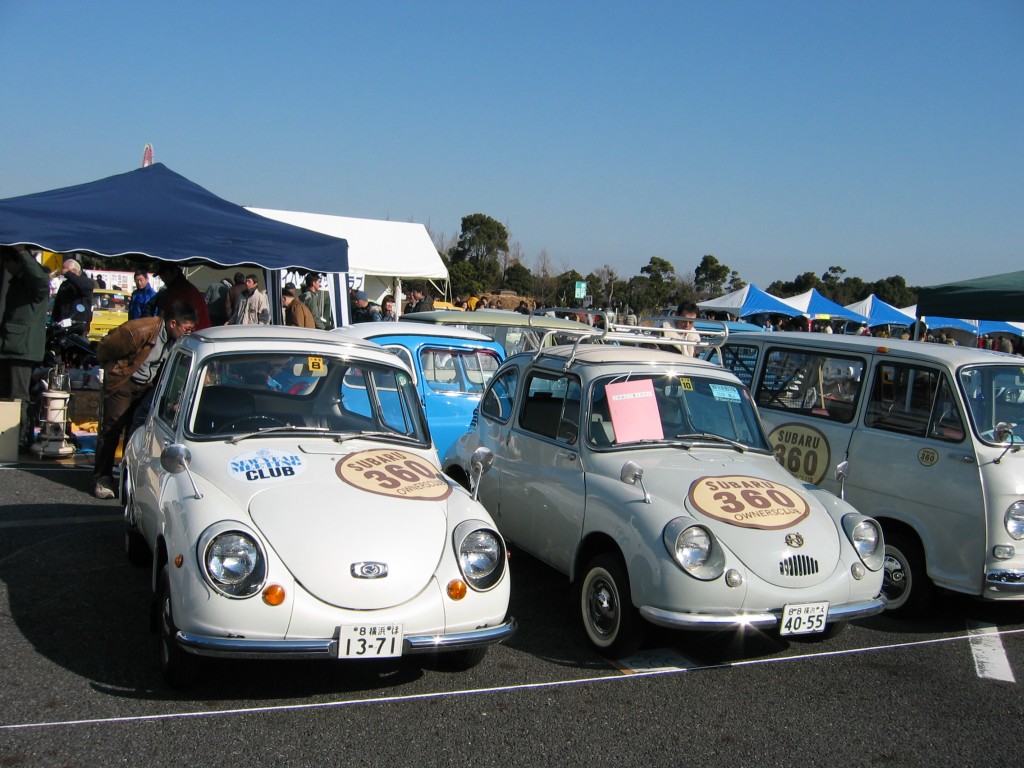 One year, I met a Subaru 360 owner who had already 20 of them in his collection. But still every year, he said, he went out to buy another. The tiny 360 cc rear-engined Subaru was a breakthrough car for its day in Japan, but still why the obsession? To “protect” the 360 and prevent it dying out. But, of course… 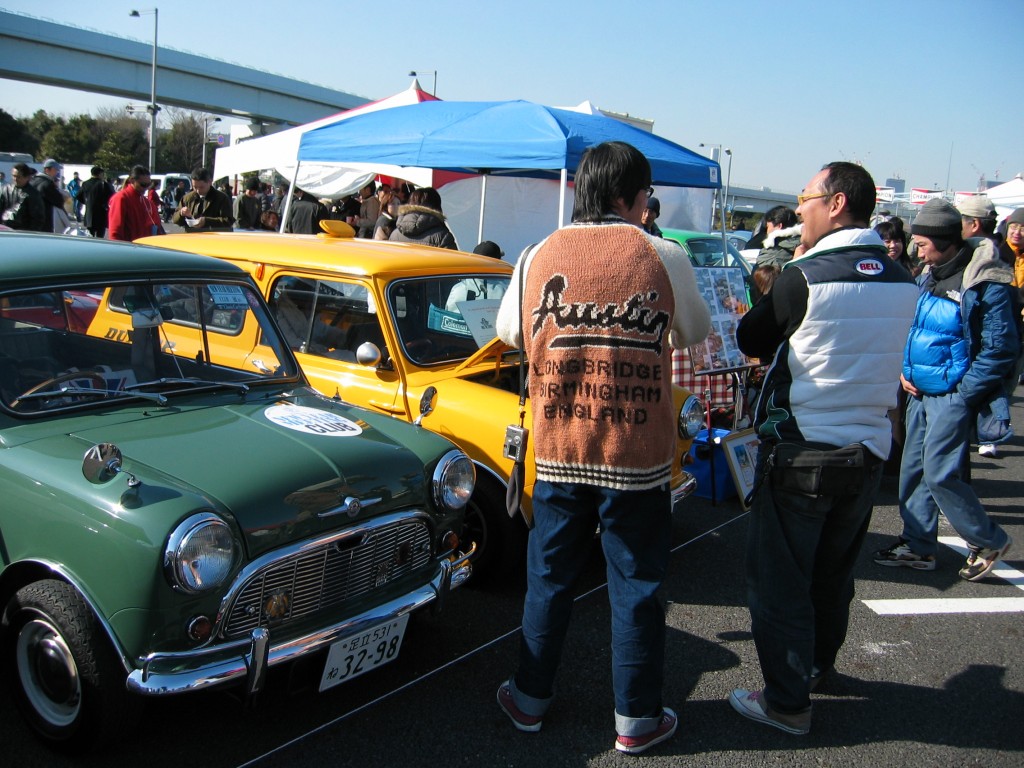 Japanese collectors can be seriously alternative. The Mercedes Unimog has a die-hard cult following. The Vanden Plas 1300 has long been Big in Japan (it’s admired as a mini Rolls Royce). The BMC Mini following is perennially huge. 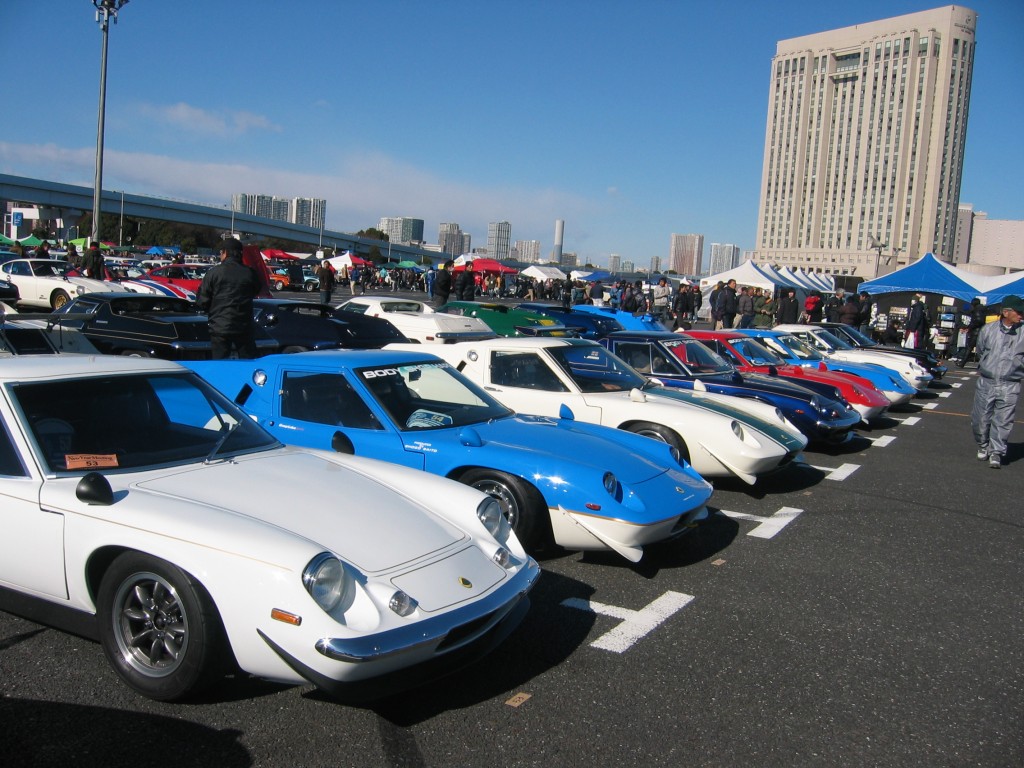 Speaking of Brits, the Lotus Europa is another with a hardcore fan base in Japan and every year at Daiba, you see 20-30 of them, all neatly lined up, JPS colours and all. Caterhams, Morgans, Triumph TRs, MGBs…they all turn up. 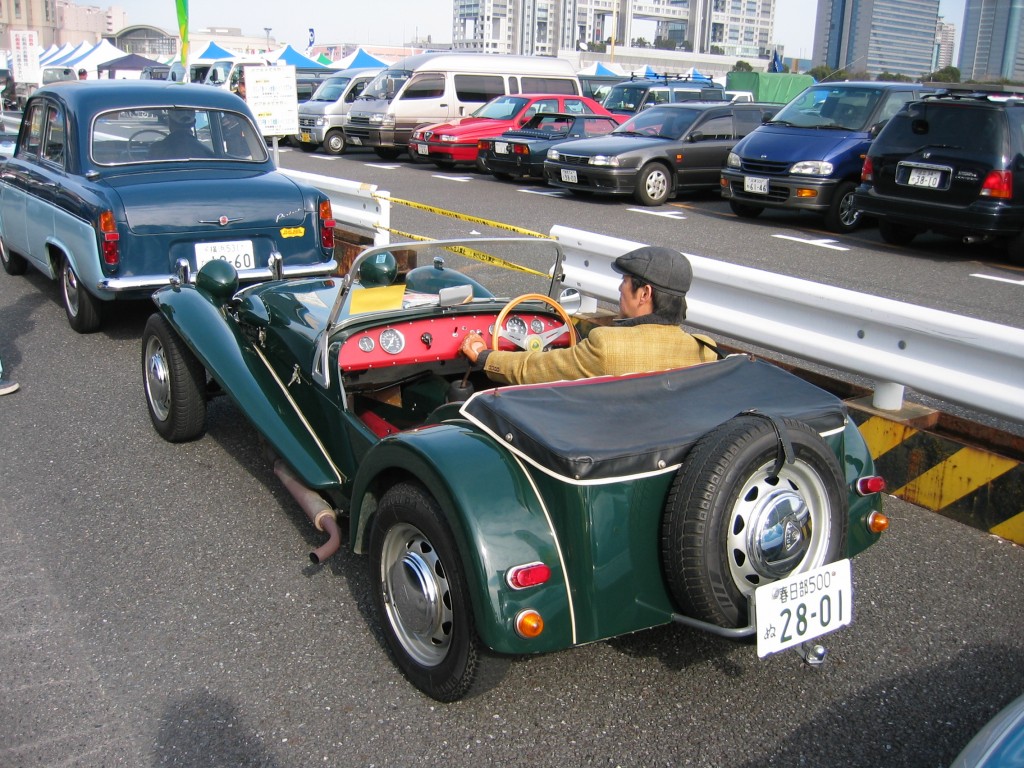 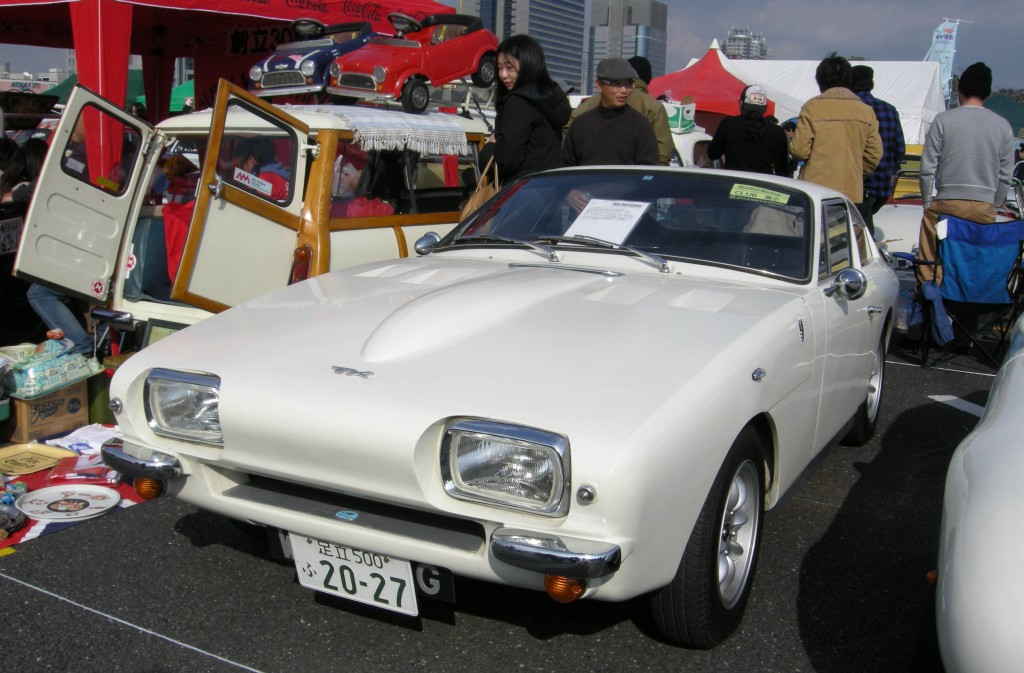 Or how about a Fairthorpe TX-S? One of these turned a year or so back. Or wonderfully obscure 328 cc three-wheel Berkeley T60? That’s what I mean about expecting the unexpected. 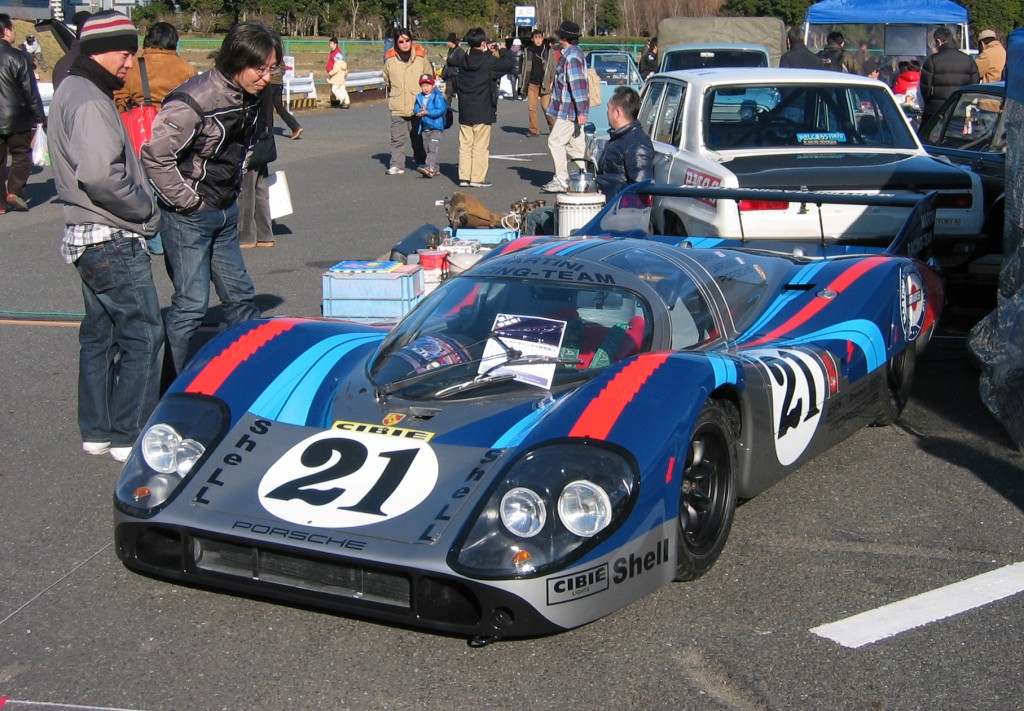 Arguably even more of a head turner was the pristine Porsche 917 long tail in Martini colours. Except, look again and it seems, um…smaller. That’s because it’s actually based off a three cylinder Mitsubishi i minicar! One truly creative mind at work there. 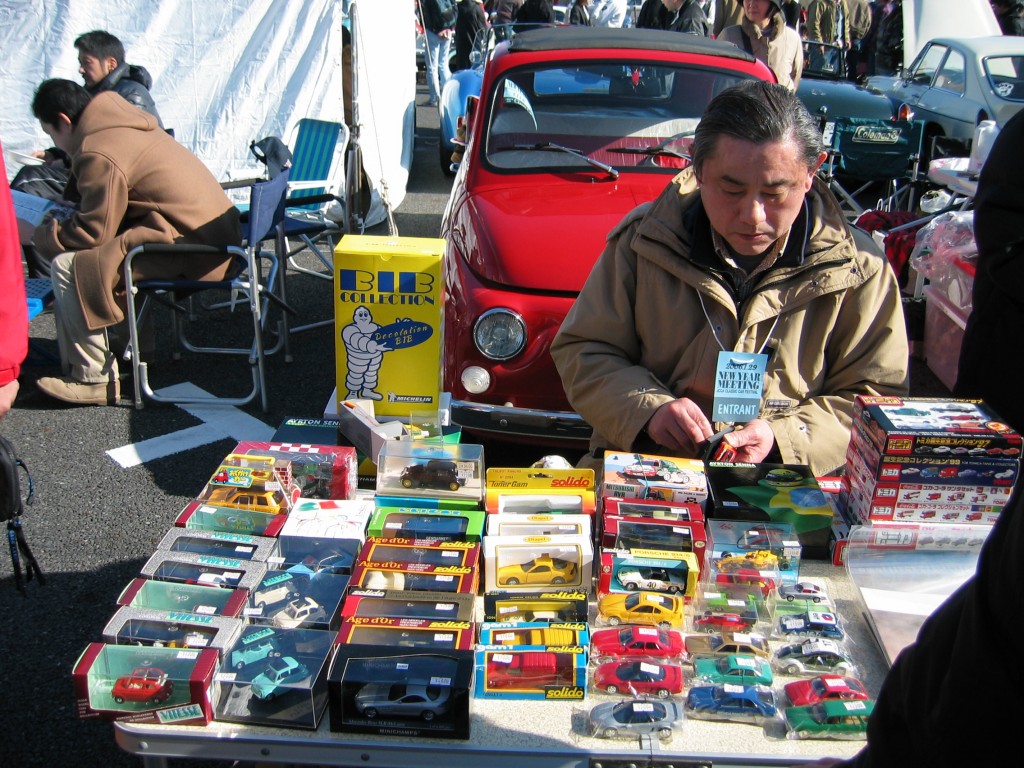 When I lived in Tokyo, I made a point of going to the NYM every year. For one, it marked the beginning of the end of winter. After New Year itself, the Tokyo Auto Salon custom/tuner show, Detroit Show, plus various deadlines, it was good to have a day at the end of the month to ‘switch off’ and just enjoy the cars, ambience and surprises at the NYM which most years, included a parade as well, plus nice concours.
Enjoy.